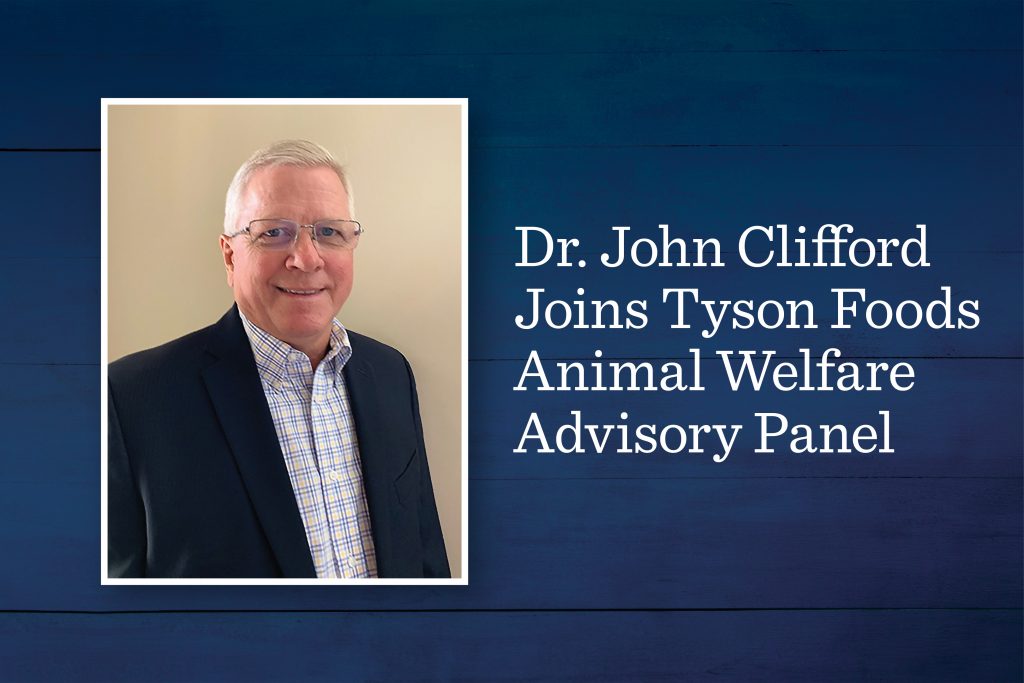 As part of our core culture, we look to continuously improve the welfare of animals entrusted to our care. Our company employs more than 50 animal welfare specialists, we work alongside third-party auditors, support animal welfare research and rely on our Animal Welfare Advisory Panel.

The Tyson Foods Animal Welfare Advisory Panel is a 13-member group including experts in the fields of farm animal behavior, health, production and ethics. We’re proud to introduce the newest member of this panel, Dr. John Clifford.

Dr. Clifford’s career in animal welfare is extensive, having worked 34 years for the U.S. Department of Agriculture and 12 years as the Chief Veterinary Officer for the USDA and the Animal and Plant Health Inspection Service (APHIS) Deputy Administrator for Veterinary Services.

During this time, he oversaw the USDA’s efforts for events such as the 2014-2015 Highly Pathogenic Avian Influenza, witnessed the eradication of many animal diseases, and often provided testimony on Capitol Hill.

His interest in large animals, he says, began at an early age.

“I was born and raised on a farm with beef cows and I always saw myself as being with cows,” Dr. Clifford said.

As a veterinarian in private practice early in his career, he mostly cared for dairy cattle.

Then his interest turned toward the federal government sector, where he began work as an epidemiologist for brucella, tuberculosis and other diseases. From there, he moved into management and administration – and on to the USDA.

Both of his parents had careers in the federal government, and his father strongly instilled in him the role of being a civil servant.

Now retired from public service, he runs his own consulting company and works for the USA Poultry and Egg Export Council (USAPEEC), a nonprofit trade organization, as a veterinary trade policy advisor.

He joins the Tyson Foods Animal Welfare Advisory Panel as an expert in safeguarding the nation’s poultry and livestock. In their prior government agency roles, Dr. Clifford would occasionally work together on issues with our own Dr. Barbara Masters, who served with the Food Safety and Inspection Service.

Dr. Clifford enjoys a familiarity with other panel members through their respective professional careers and recently participated in his first three-day meeting with the panel.

Animal welfare is a passion of Dr. Clifford’s, not only because of the oath he took as a veterinarian, but also because of the basic role he says every human being has in caring for animals.

“We have a responsibility of stewardship, all of us do, as human beings to treat animals with the utmost respect and care and trying to do those things in the best way possible.”