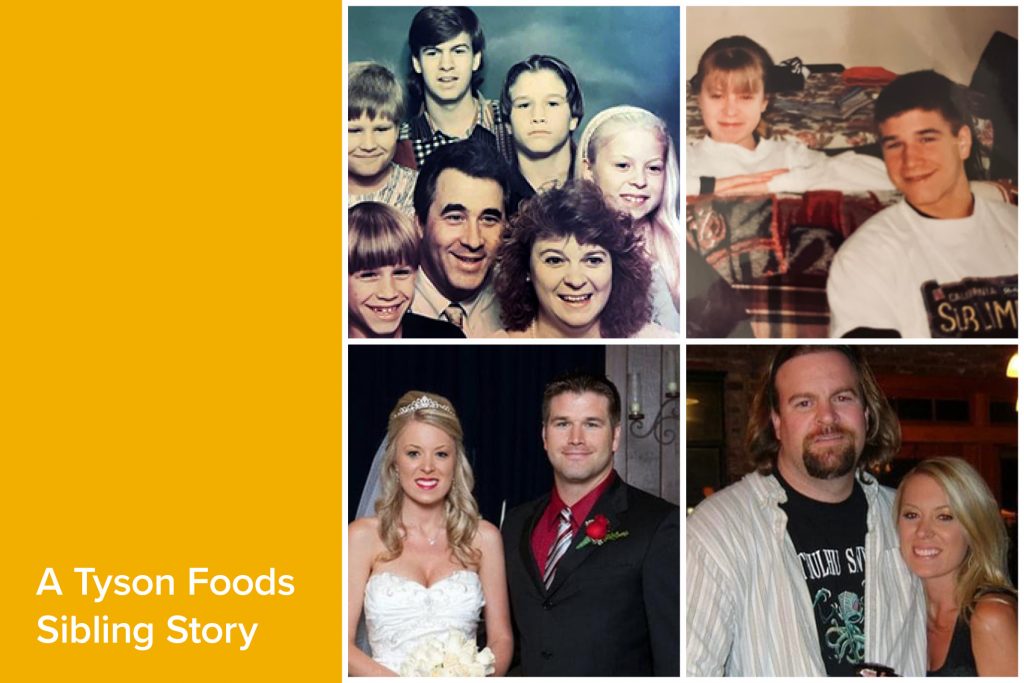 Stephanie, Christopher, and Michael are not only siblings – they’re also coworkers. Something they likely never imagined when they were growing up. There were 10 siblings among their blended family, and Stephanie says they’ve always been close.

Each of them ultimately went different paths as adults. Christopher served in the U.S. Air Force, while Mike was in the U.S. Navy. Eventually, Mike landed back in Northwest Arkansas and even roomed with Stephanie during his undergraduate studies. He then got into the energy space and gained international experience along the way.

Over the last several years, their professional journeys have led them all to Tyson Foods.

“I don’t think we ever really had an intention of everybody working at the same spot,” Stephanie said.

She was the first to join almost three years ago and oversees the global Human Resources transformation, which helps ensure Tyson delivers an unmatched team member experience. Next to join was Michael, who works in commodity purchasing, buying natural gas and propane for Tyson facilities across the U.S.

The most recent addition has been Christopher, who works in Information Technology. After hearing Executive Vice President and Chief Sustainability Officer John R. Tyson describe what it means for Tyson to help feed the world, he was ready to jump on board.

“Food insecurities are such a big thing for families who are struggling,” Christopher said. “And that was really a mission I could get behind.”

Not to mention the added bonus of being with his siblings. He says working together has brought their “family closer at work and at home,” allowing them opportunities to connect that they wouldn’t have had otherwise.

“Chris and I can hop out for lunch. Same thing with Stephanie, at any time,” Mike added.

They also recognize the multiple threads of “family” that weave through their Tyson Foods experience. Four generations of the Tyson family have worked for the company, and there are many other families who share the same experience.

“In my first two weeks at Tyson, I got to visit the Berry Street plant, and I was amazed that we had three generations of family members working there,” Christopher said. “You can tell when someone doesn’t just recommend working for Tyson to their friends, but they recommend it to their children and their grandchildren. They obviously are seeing the value in it.”

They also marvel at how, despite their unique backgrounds and diverse experiences, each has found a home at Tyson Foods. And they hope to soon work alongside even more of their family. Stephanie says their journey coincides with a motto Tyson Foods President & CEO Donnie King operates by: “If you get the heart of someone, you get their whole self.”

“It sounds so cliché, but we’re all family,” Stephanie said. “So, it’s almost like we have our heart here because we’re all together.”

To find out more about the Tyson Foods experience and how to join our family, visit our careers page here: https://www.tysonfoods.com/careers.