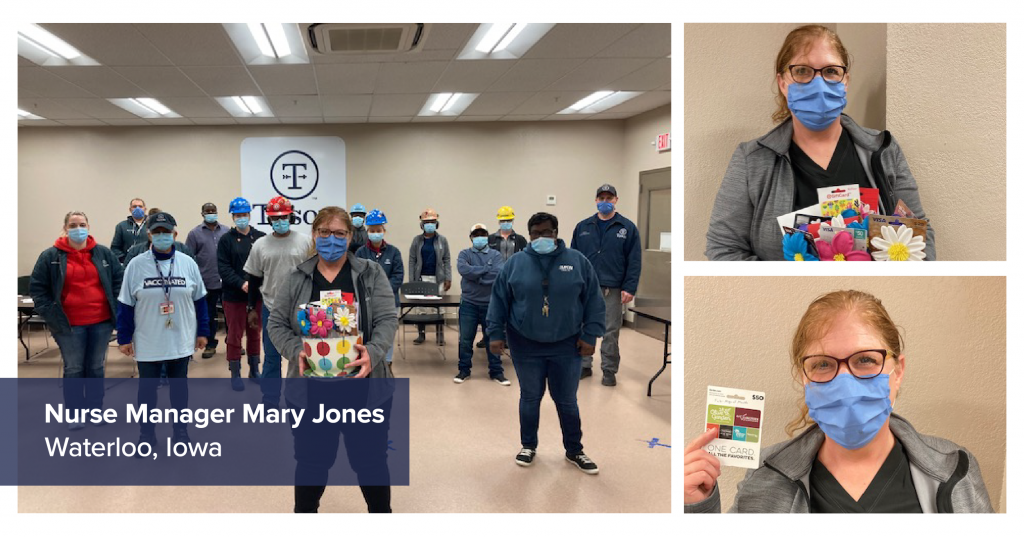 It’s impossible to think about the last year without recognizing healthcare professionals. As with countless other companies and industries, Tyson Foods has relied heavily on nursing staff for expertise and care of our team members across the country.

We employ approximately 600 nurses and administrative support personnel. One of them is Nurse Manager Mary Jones at our Waterloo, Iowa, facility.

She’s worked there for 20 years, first as a staff nurse and, for the last 10 years, as the nurse manager. There are 12 nurses in total at the plant and four interpreters/clerks.

“The people I work with, we’re like a big family,” she said. “We’re kind of like our own little town because we’ve got 3,200 employees and all different ethnic groups. I really enjoy that because you get to learn about the different cultures.”

In addition to navigating the extra responsibilities at work during a pandemic, Mary has faced some personal challenges. In March, she lost her home and some additional property to a fire.

“We’re hanging in there,” she said. “We’re just taking it day by day and working through all the things that we need to work through. Luckily, my husband is very handy with different things – maintenance. He actually demolished the entire house.”

One surprise was discovering some of her baby pictures amid the ashes – some of the few mementos to survive. Mary and her husband are currently living in a fifth wheel until they can rebuild.

“We’ll make it through,” she said. “We’ll get things rebuilt and start new, and it’ll be better. My home family and my work family have been awesome. Absolutely awesome.”

She says team members in Waterloo have rallied around her, bringing her food and taking up a donation for her. A friend also held a benefit in her honor.

“The thoughts, the prayers, the donations have been huge,” she said. “I couldn’t ask for anything better.”

And there’s been another a bright spot for Jones during a challenging season. She was recently named a Cedar Valley Top Nurse by The Courier in Waterloo.

“I was surprised,” she said. “I knew it was out there, and I’d been nominated. But you figure there’s probably a million other nurses in the same area that, you know, maybe they deserve it more. But the people that I work with here at Tyson were very supportive about me getting it. And, believe me, they voted like crazy.”

The feeling, she says, is mutual. “Those people mean the world to me.”

Mary will be honored at an awards luncheon later this week.