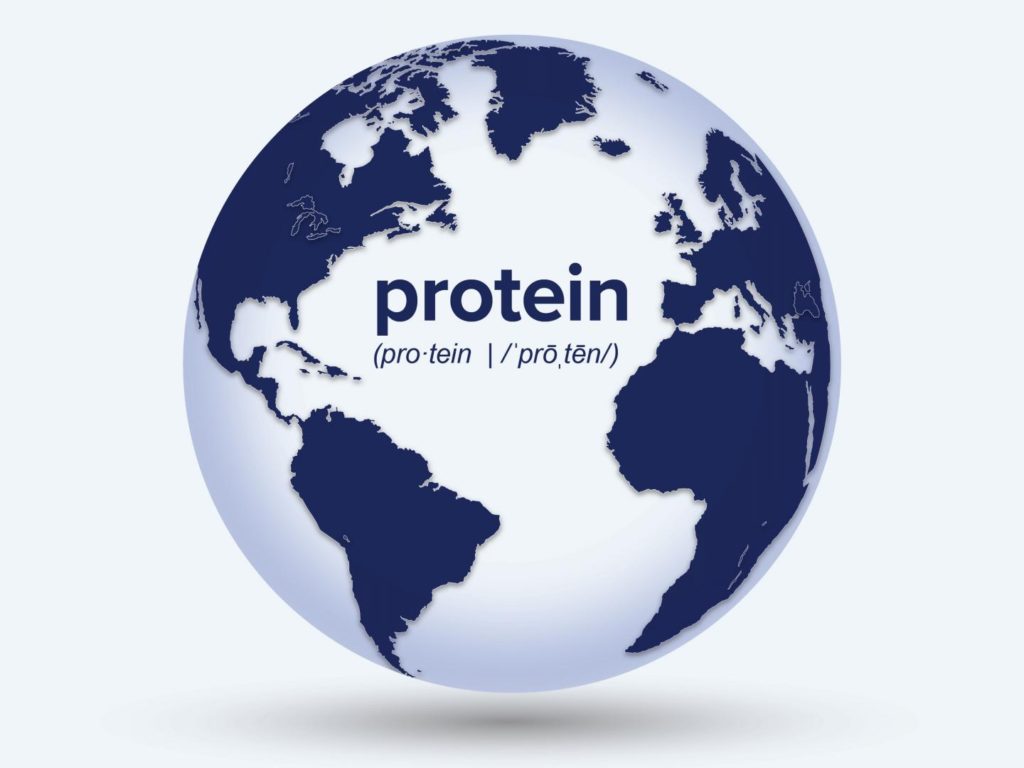 26 FebWe’re All Made of the Same Protein

1: any of various naturally occurring extremely complex substances that consist of amino-acid residues joined by peptide bonds, contain the elements carbon, hydrogen, nitrogen, oxygen, usually sulfur, and occasionally other elements (such as phosphorus or iron), and include many essential biological compounds (such as enzymes, hormones, or antibodies)

2: the total nitrogenous material in plant or animal substances

There are 20 different amino acids that make up protein. While our bodies produce 11 of these amino acids, we can only get the other nine, the ESSENTIAL AMINO ACIDS, from what we eat.

And with protein SUPPORTING EVERY CELL in our bodies—our skin, our hair, our bones, our muscles and more—it plays a role in vital functions, such as forming major hormones like insulin, metabolizing our food to convert it to energy, promoting our immune systems, and even regulating every beat of our hearts.

For the past several years, protein has been a golden child for health and nutrition trends. From buzzy trends like PALEO to KETO to Whole30, we’ve seen our social feeds fill up with “how-tos” and beginners’ guides to these protein-focused lifestyles. And a quick dip into GOOGLE TRENDS will show you that worldwide search interest for “protein” has been steadily increasing for more than a decade, with “ketogenic diet” and “paleolithic diet” and “plant based protein” frequently popping up in top related topics.

The global demand for protein—animal and plant-based—is at an ALL-TIME HIGH. And while protein consumption and preferences may differ across the globe, no matter how you slice it (or fillet it or milk it or grow it), protein is an essential building block for all of us.

At Tyson Foods, the same holds true. With dozens of nationalities and cultural differences across our organization, it doesn’t matter how you say it (or prepare it or present it or consume it): protein powers us to bring our very best to work each day, and that’s something that transcends any borders or language barriers.

Several team members who represent our diverse mix of talent shared with me what “protein” means in their corner of the world.

Protein in South Korea: I believe the most popular type of protein is beef. In one of Korea’s most popular dishes, BULGOGI (marinated beef barbecue), thinly sliced beef is marinated and grilled with garlic and sliced onions.

A dish that makes you think of home: I have been traveling back to South Korea every couple of years and the two dishes that make me think of home are KALBI (marinated and grilled beef short ribs) and SUNDUBU-JJIGAE (soft tofu stew w/ veggies and beef).

Protein in Indonesia: Chicken and fish are most popular. PADANG, SUMATRA CHICKEN OR FISH curry is delish! We also make Sulawesi spice to use in RICA-RICA—it’s very spicy, but very delicious! We also have a famous CHICKEN SATAY!

A dish that makes you think of home: Chicken Satay with peanut sauce. It reminds me of my mom’s cooking.

Protein in Panama Republic: The most popular for us are beans and milk.

How it’s prepared: We boil the beans until they are soft, then we put seasoning like cilantro, garlic, and we fry onions and green peppers to add to it. We use milk in different ways, but we commonly make a dessert called ARROZ CON LECHE (rice with milk, or “rice pudding”). We cook the rice with regular milk until it’s soft, then we pour in condensed milk, evaporated milk, and add raisins, cinnamon, and some eggnog powder to give flavor.

Protein in the UK: Protein is the star of most meals, at least it was when I was growing up. Whether it was my mum’s amazing Sunday roast beef, fish and chips wrapped in newspaper, or my absolute favorite—BANGERS AND MASH!

As GUS PORTOKALOS (dad from My Big Fat Greek Wedding) would say: “Give me a word, any word, and I show you how the root of that word is Greek!” Protein comes from the Greek word PROTEIOS meaning “first quality” or “primary.”

Most popular protein in Greece: It varies by region in Greece—we like variety. Chicken is popular and is used in all kinds of meals from stew to soups (AVGOLEMONO with chicken is one of my favorites). We also eat a lot of lamb—on a spit, in a stew or in the oven with rice or roasted potatoes. Finally, you can’t forget cheese and yogurt!

How it’s prepared: Of the popular protein, fish is filleted, fried, salted and dried and then made into a salty or fermented paste, which is used in a lot of Burmese cuisine. Nuts are typically deep-fried. A mix of deep-fried beans and nuts is a popular snack due to portability, and peanut powder is widely used to prepare different Burmese salads. Beans are used in several ways—bean sprouts, prepared as a paste, or fermented, which is very popular in some parts of the country. Chicken, beef and pork are mostly cooked curry style.

Most popular protein in Ecuador: Fried pork, or “fritada.”

A dish that makes you think of home: CUY HORNADO. “Cuy,” or guinea pig, has been a staple in ANDEAN CUISINE for around 5,000 years—it even has its own national holiday in Peru!

Protein in India: PANEER, lentils, and chickpeas. Meat consumption (especially beef) is very low in India since cows are considered holy: the cow is given the significance of a “mother” that feeds the country, since cows provide milk used to make yogurt, paneer, buttermilk and other things that are an integral part of Indian diet.

The notion of being vegetarian is deeply rooted in culture and religion. Popular religions consist of: Hinduism (which typically does not consume meat, especially red meat), Islam (which consumes meat with the exception of pig), Sikh (which consumes mostly white meat), and Christianity.

Favorite Chinese dish: RED BRAISED KAO FU—braised gluten with bamboo, wood ear mushrooms, shiitake mushrooms, carrots, ginger, tofu, and dried lily flower. No one I know works with gluten like this. Vegan and delicious, hot or cold. My mom makes a big pot of this, and I can never get enough of it!

Most popular protein in Mexico: Chicken.

A dish that makes you think of home: Caldo de Pollo (chicken soup).

Protein in Belarus: Fish is probably the most common or iconic protein. Think whole fish, though, not cutlets. We’re talking head, eyeballs, everything.

A dish that makes you think of home: SELYODKA POD SHUBOY. The direct translation of this dish is pretty funny: “herring under a fur coat.” It’s like a layered cake of sorts – beets, carrots, potatoes, herring, and eggs. The “fur coat” is the layer of roasted beets that sits atop the herring. It’s a really colorful dish…but the texture takes some getting used to

There are 20 different amino acids that make up protein.

There are more than 120,000 team members that make up Tyson Foods.

I think all of them are essential in making up the unique threads that weave together our cultural fabric.