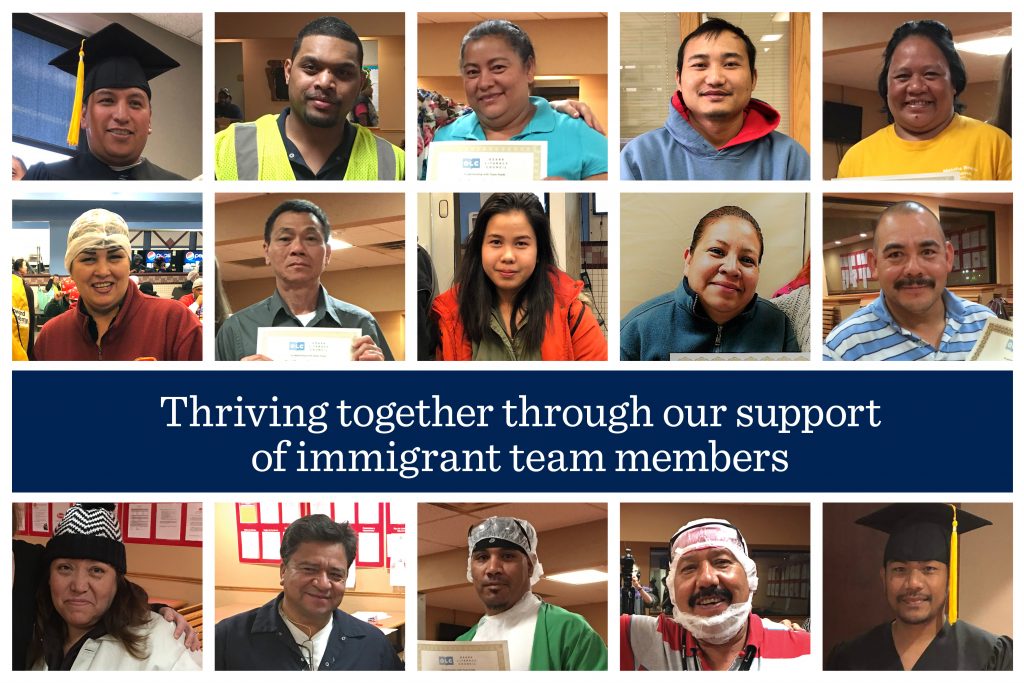 14 SepHelping Immigrant Team Members Thrive at Work, in the Community and Beyond

William Barnice has worked for Tyson Foods for 19 years at our plant in Van Buren, Arkansas. He is a pallet jack driver and licensed forklift operator.

But that’s just his day job. When he’s off, you could say William is a full-time student. He has taken advantage of the opportunities available to him through Upward Academy, an on-site education program for team members offering free and accessible classes in English as a Second Language (ESL), High School Equivalency (HSE), U.S. Citizenship, and other skills.​​

Between Upward Academy and extra instruction at a local adult education center, he’s put in more than 700 hours of class time. That means William, originally from El Salvador, has completed his ESL classes, earned his GED and several career-related certificates, and is studying for his U.S. citizenship.

Plus, he’s enrolled in college. Quite a feat for someone who is also a single father to four girls.

“I’m trying to be a good example,” he said. “I want them to learn that studying and learning never ends. Sometimes you can have school in the back of your mind, but way back. The fact that Tyson is offering team members the chance to take free classes through Upward Academy is a great thing.”

William represents the diverse immigrant community that is part of the Tyson Foods family. Many of our frontline team members are new immigrants to the U.S. and come from dozens of different countries: up to 50 different countries may be represented within a single plant. We recognize how critical each of them is to the work we do, and how they are at the heart of the achievements we share as a company.

Upward Academy is one of the primary ways we serve them. Its success is due to an extensive network of adult education providers and through ongoing collaborations with organizations such as the United States Citizenship and Immigration Services (USCIS) Office of Citizenship.

In fiscal year ‘19, Upward Academy experienced its biggest year of growth, with 4,103 non-English-speaking team members offered access to ESL in 56 total Tyson Foods locations. More than 2,800 team members have also utilized our citizenship tuition reimbursement program since 2018, totaling over $2 million in contributions from the company.

Another resource that goes hand in hand with Upward Academy is the Tyson Certified Interpreter Program, which began in the early ‘90s and is designed to help reduce the language barriers in Tyson Foods facilities. It is validated through the University of Northern Iowa and Multilingual Translation Services, which benefits hourly team members, management support, management, and various other departments in all 18 of our fresh meats facilities.

Team members who are interested in becoming interpreters take an assessment in both their native language and English to qualify. Depending on their score, they may be eligible to become a full-time interpreter. Currently, assessments are available in 22 of the most common non-English languages spoken by Tyson Foods employees and American Sign Language (ASL).

Jenifer Bauer oversees the program and says interpreters are always on-call, as a resource within the plant and beyond.

“Interpreters work closely with the Tyson diversity trainers and/or Tyson community liaisons to help team members get acclimated in their communities,” she said.

Tyson Foods has invested $8 million in the interpreter program over the years. Bauer says the interpreters’ ability to communicate in a simple, clear and conscious manner is invaluable when it comes to company vision, goals, on-the-job training, safety, and more.

“The ability to talk to our team members, understand their needs and wants, and help them has been critical for Tyson,” she said.

There are a number of additional organizations we work with on a regular basis to assist our immigrant community. Some of them have received Tyson Foods grants for the work they do. These include Arkansas Immigrant Defense, Immigrant Connection in Olathe, Kansas, Catholic Social Services in Nebraska, Catholic Charities in Omaha, Nebraska, Siouxland Community Foundation in Iowa, The Bridge Community Church in Logansport, Indiana, and Ethnic Minorities Of Burma Advocacy And Resource Center in Des Moines, Iowa. We’ve invested more than $500,000 in these organizations this year alone.

Our diverse immigrant workforce inspires us every day. When they have the support they need, we thrive together as Tyson Foods.