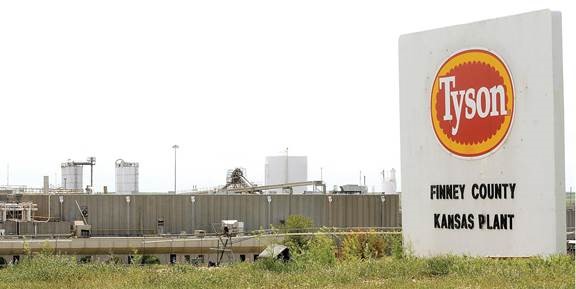 20 SepForward Together on the Road to Recovery

In the initial days after the fire at our Holcomb, Kansas, beef plant, we started seeing local business marquees, banners and buttons with the message “We Stand with Tyson. Forward together.” We were encouraged by the support, especially as we considered the challenges ahead and how the unfortunate closure of our facility affects so many people – our team members, the community, cattle producers, customers and investors.

We want everyone to know that we have been and will continue to strive to do the right thing for all these important stakeholders as we work to bring our plant back on line.

While it’s not visible from the outside, the fire severely damaged one of the most critical parts of the plant: the hydraulic and electrical system that supports the harvest floor. We’re currently completing replacement of support beams and the roof. This will be followed by putting in a vast amount of new wiring and the installation of equipment. As previously reported, we currently expect to resume normal operations by the beginning of 2020.

The 3,800 team members who are part of our Finney County plant are also a part of our Tyson family and we want to support them.  These team members are vital to our continued success. That’s why we quickly decided to guarantee 40 hours per week in pay for our active, full-time employees until we’re able to resume normal operations. Some of our team members have been instrumental in helping with clean up, allowing us to quickly assess the damage and begin reconstruction. In late August we were able to resume some limited ground beef and value-added production at the facility.

We recognize the disruption the fire has caused for cattle suppliers and have been working diligently to mitigate the impact. We’ve assumed the cost of diverting cattle to other Tyson beef facilities, where we have been able to increase production. In addition, some of our Finney County team members volunteered to temporarily transfer to other Tyson beef plants to help with increased production and we’ve invested in helping relocate them.

Communication to our suppliers has also been important. That’s why we’re holding ongoing calls and meetings with key suppliers, industry leaders and government officials to provide updates and answer questions.

We will remain forever grateful to the Finney County community and state of Kansas for their support in the aftermath of the fire. We appreciate the quick response of local firefighters, law enforcement and EMT teams and are thankful no one was hurt.

We will continue to update the community and all stakeholders as we move towards getting the facility back to full strength. It’s during times like this you realize the importance of community and the relationships that have been built over the years. While temporarily losing the plant has created a host of challenges for our company and those who depend on us, it helps knowing there are others who “stand with Tyson” and that we’re moving “forward together.”

Below are before and after photos of our Finney County plant.