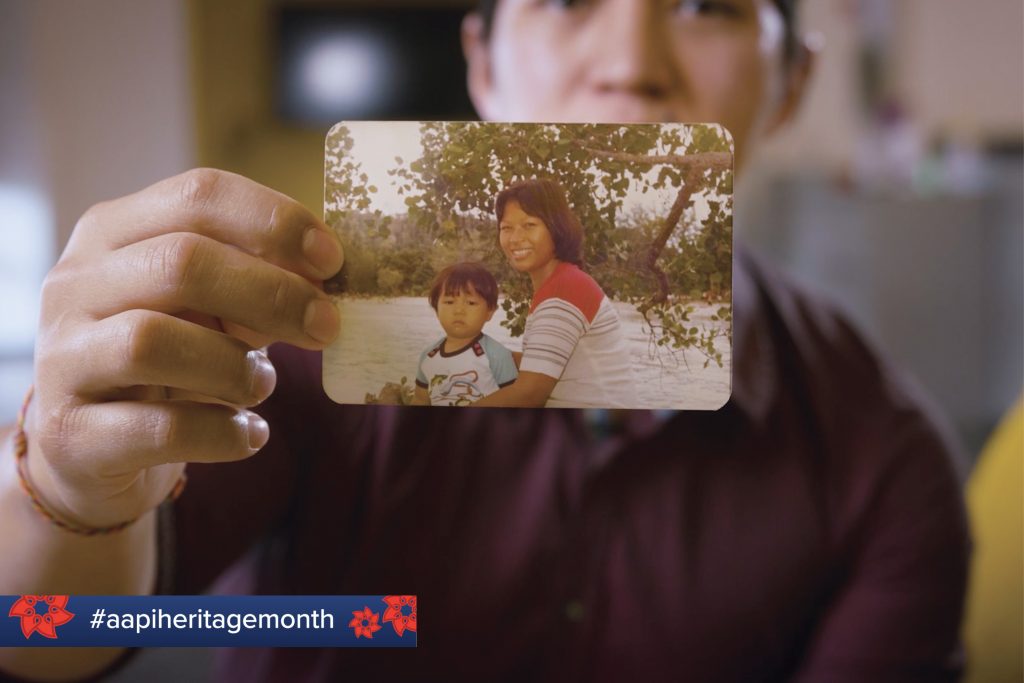 04 May“They Did It All For Us:” Team Member Reflects on Parents’ Journey to the U.S. 

Johnathon, a Tyson Foods senior engineering manager, spreads a handful of faded photos out on the table between us. They look like typical family photos: a mom holding a daughter, a couple at a scenic overlook, a large group photo, a closeup of a young woman smiling at something or someone off camera. But for Johnathon and his family, these snapshots are irreplaceable.

“This is them stepping foot in the States,” Johnathon says, holding up a photo. “There’s my dad and my mom and my sister and my aunt.”

I ask him who took the photos, and he says he has no idea – but he’s grateful to have them.

His parents fled Vietnam after the war, escaping on a small fishing boat alongside 100 others, carrying Johnathon’s sister who was only 18 months old at the time. They’d split up from Johnathon’s aunts and uncles, everyone forced to make their way out on their own. Food and water were scarce and supplies limited.

“They basically just went out to sea hoping they would end up somewhere else,” Johnathon says. “They were lost at sea for about 10 days.”

On that 10th day, they were rescued. Not everyone on board survived, Johnathon says. Many of the children passed due to the lack of food and water. His parents, and especially his sister, were lucky.

They spent eight months in a refugee camp in Indonesia and on February 2, 1982, they arrived on U.S. soil.

In Florida, the extended family reunited – Johnathon picks up the group photo with his parents, aunts, and uncles together again – for the first time since they’d left Vietnam years before.

But starting a new life in a new country was hard, and Johnathon’s parents struggled to find work because they hadn’t yet learned English. The odd jobs his dad could find weren’t enough to support the family, so an uncle told them to go to Fort Smith, Ark., because there were some small poultry facilities that would give them a shot.

So they did, and his parents started work in a poultry plant in Fort Smith in August of 1982.

“This is my mom in the plant,” Johnathon says, pointing to another picture, a young woman in her early 20s smiling over a sheet cake. “They threw her a birthday party. I’m not sure she’d ever had one before.”

It was there that Johnathon’s mom learned English and was given opportunities to advance, moving from general worker to trainer, to team leader, and then shift supervisor. Because of their jobs at the poultry plant, Johnathon’s parents were able to save up and eventually opened their own restaurant in 1993. He remembers working the register every Friday and washing dishes in the kitchen over the summer.

His parents made education a top priority for their kids – and it paid off. One of his brothers is also an engineer, working in the defense industry, and his sister is a nurse. His oldest brother recently decided to switch careers and has left finance to go to med school and become a doctor.

His younger brother is pursuing entrepreneurship through elevating the local food community online. For Johnathon, being able to advance the industry that gave his parents their start is one of the most rewarding parts of his job.

“I’ve had the opportunity to work in the defense and auto industries, and I’ve worked on a wide range of projects,” Johnathon says. “And, to be honest, my time here at Tyson has been the most fulfilling. All the work I’ve done to help keep product moving to the stores and to everyone’s dinner plates – that’s been the most impactful. Just making sure we’re keeping our country fed.”

In his job in Automation and Optimization, Johnathon oversees packaging for our Fresh Meats plants, helping Tyson stand on the forefront of robotics and technology. But, he says, it always comes back to team members.

“The biggest misconception with automation is that it’s killing jobs,” he says. “But it’s really not the case. We’re trying to make jobs easier and better, and it helps lift people up. So, we can eliminate these jobs that are dangerous or very tiresome and make it better for team members.”

His mom had one of those grueling positions in the 80s, processing poultry completely by hand – a very high-skilled and difficult process that caused great wear and tear on the hands. Johnathon talks about the daily pain she felt during those years. Recently, he saw a machine Tyson Foods created to aid in that process at our Tyson Manufacturing Automation Center (TMAC).

“It’s really cool seeing a machine that does the job my mom did, and it does it better, with better yields and with better safety, and we’re not wearing down team members,” he says. “It’s that kind of stuff that we need to keep pushing for – to make jobs better and safer.”

And those are the priorities for Tyson, Johnathan says; priorities that are reflected in our actions. His parents came into the industry looking for opportunity and found it, and what makes Tyson especially unique is all the ways we support our team members, in and out of the workplace.

Programs like our 1+2 Maintenance Program and Upward Pathways upskills team members through training and certifications, at little to no cost. Most recently, we announced a $60 million expansion of Upward Academy through a partnership with Guild to provide free education to U.S.-based team members. Beginning this summer, U.S. team members will have the ability to attain master’s, undergraduate and associate degrees, career certificates and literacy and technology fundamentals – all for free.

Tyson Foods is also a place where anyone can find a home, no matter where you come from. We’ve committed more than $1 million to our Tyson Immigration Partnership (TIP) program, providing legal services and guidance to those going through the U.S. citizenship process. The program now supports 40 locations across 14 states.

Johnathon’s parents ran their family restaurant, China Jade, for 27 years. At the closing celebration in 2019, families turned up from across Arkansas, Oklahoma, and Texas to share one more meal, and Johnathon saw some of the lives touched by what his parents built.