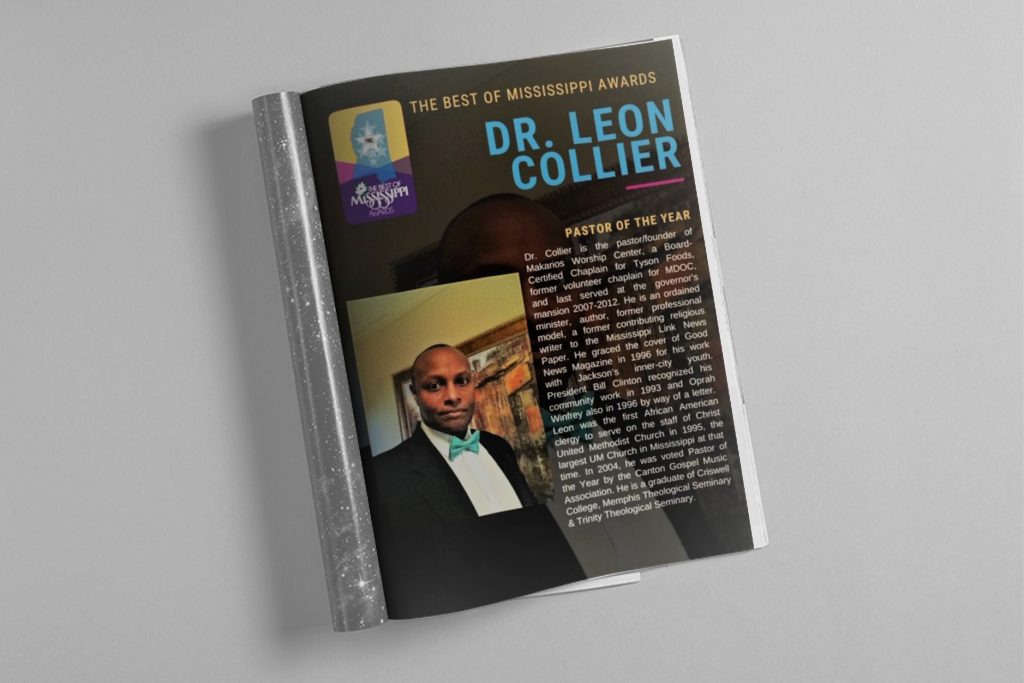 We recognize our chaplains as some of the most uniquely equipped leaders to act as a support to our team members. But it’s an added bonus when others recognize their contributions as well.

Leon Collier, chaplain at our Vicksburg facility, was recently named Mississippi Pastor of the Year by Business Empowered Mississippi.

The award speaks to Leon’s dedication to his faith, work ethic and investment in the community.

“It’s very humbling to win this award, because there are many pastors who are deserving of this honor,” Leon said.

Prior to joining Tyson Foods in 2010, Leon was heavily involved in the inner-city of Jackson, Mississippi. Leon led the Gentlemen of Quality Club, an organization that teaches young men ways to strengthen themselves spiritually, educationally, and socially. His successful commitment to the program was recognized in 1993 by former Mississippi Gov. Kirk Fordice and former President Bill Clinton.

In 1995, he became the first African American clergy member to serve on the staff at Christ United Methodist Church. He also led the local Urban Ministry and helped guide young men and women toward a good education and faithful lifestyle.

The following year, he was recognized for his work with Jackson’s inner-city youth as the cover story for Good News magazine, and Oprah Winfrey even wrote him a letter of support and praise. His first Pastor of the Year award was given by Canton Gospel Music Association in 2004. Most recently, he served in the governor’s mansion from 2007 to 2012.

“I have always been involved with volunteer chaplaincy,” he said. “I’ve served at the Mississippi Department of Corrections, as a police chaplain in Kosciusko, Mississippi in the early 1990s, and as a police chaplain for the Canton Police Department in Canton, Mississippi in the mid-2000s. I see what I do not merely as a job but a calling. I enjoy talking with team members and hearing their problems and stories and helping them make sense of it all.”

Leon stays busy serving the community in various ways. He is the founder and pastor of Makarios Worship Center in addition to being one of our full-time chaplains. Not only is he an ordained minister, but he’s also an author, former professional model, and former contributing writer for The Mississippi Link newspaper.

“My motivation for continued service to the community is knowing I can make a positive difference in the world,” he said. “Helping people has always been a part of my makeup. As long as I have breath, I will always try to find ways to impact the community.”

Additionally, Mississippi Attorney of the Year was awarded to RaToya Gilmer, whose mother, Barbara, works at our Vicksburg facility with Leon. Plant Manager Allen Fulsom, HR Manager Angela Hamilton and Barbara attended the ceremony to show their support.

It’s evident Leon is an excellent resource and pillar of support for Tyson Foods team members and the community of Vicksburg. We commend his efforts, and those of our chaplains every day, that enrich the lives of those around them.