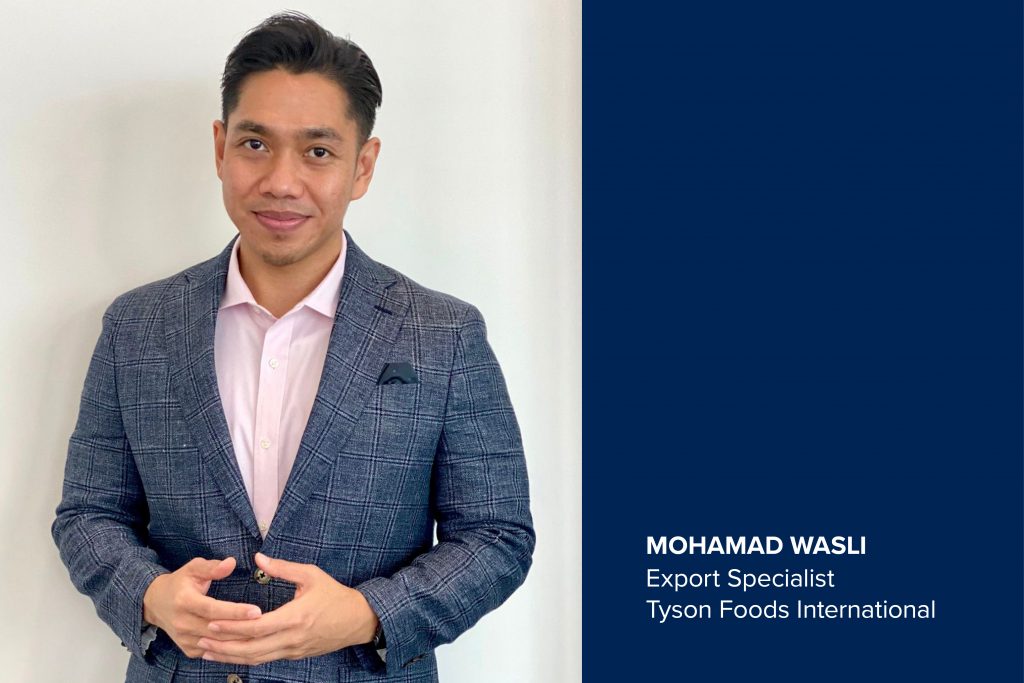 Mohamad Wasli has always loved learning. It’s what first brought him to Tyson Foods in 2018.

Like many other students, Mohamad had part-time jobs while in school. In 2018, he was studying for his PhD in education and media in London, England – a long ways away from his native Malaysia – and took on a part-time role with Tyson Foods as an export assistant.

“I said to myself, ‘Be open, look for opportunities to learn.’”

The position – and Tyson Foods as a whole – was a very different direction for him professionally. Before pursuing his doctorate degree, Mohamad was a television script writer in Malaysia, specifically for Malay and Arabic language shows (he speaks Arabic, Malay, and English, and is currently learning Mandarin and Spanish.) He wrote the first Islamic reality TV show in Malaysia, which was covered by the BBC (British Broadcasting Corporation) and expanded following seasons across southeast Asia. He was fascinated by culture, having grown up in a multicultural household and country and loves the role language and communication play in culture and identity.

“The next thing after language is food,” Mohamad says. “Food is a second language, and we all are connected and have a shared history through food. It’s interesting how food can become an identity.”

When the COVID-19 pandemic began, everything came to screeching halt for Mohamad. The timeline for completing his degree, the status of his visa, and whether his parents – his greatest supporters throughout his educational journey – would be able to see him completing his PhD were thrown into uncertainty.

But Tyson Foods remained constant, and a place Mohamad knew he could continue to learn and flourish. In August of 2020, he accepted a full-time role as an export specialist in our London office.

It’s been exciting, he says, and a challenge learning about how trade is happening in the world as he manages 20-30 customers across different countries in Europe, the Middle East, and north Africa. It’s a challenge he welcomes.

“I want to be an expert in this business, especially in the Middle East and Africa, who knows the requirements, who understands the markets, and be able to provide good links between our customers and the business.”

When he was creating TV shows, he says, he created a kind of mind map – a way of critically analyzing what viewers were gaining from the content he was creating, and how it impacted them. He applies the same philosophy to his position in working with customers and says his studies help him make better decisions and be a better intermediary between the company and our customers.

And Tyson Foods, he says, is setting him up for success.

“This is a journey I’m going to enjoy. I want to learn. I believe that knowledge can be beneficial in any form or in any field, and Tyson Foods has provided a platform for me to discover my undiscovered potential.”

He’s also excited, he says, to be part of a company that has embraced the expertise and unique perspective he brings to the table.

“We are OneTyson because of our differences. Together we are strong, and I’m proud to be part of it.”

Mohamad completed his PhD in late 2020 but couldn’t attend a graduation ceremony until this past March. His parents traveled 21 hours, from one island to another on the other side of the world, to be there.