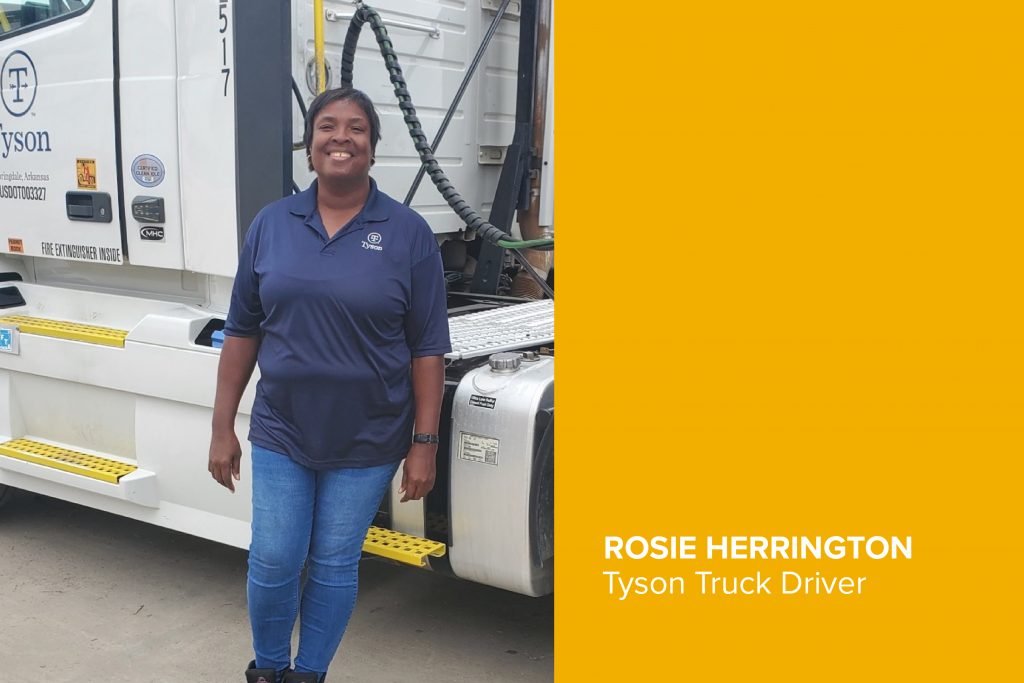 Rosie Herrington always knew she wanted to be a truck driver.

“I used to pass big trucks on the road and always think, ‘I want to do that,’” says Herrington. And when her three kids grew up, she knew it was her chance.

Rosie has been driving for Tyson Foods since 2004 and currently runs the South Georgia Shuttle route from Georgia to Alabama. She has over one million safe miles on the road, and, earlier this year, was nominated for Women in Trucking’s Driver of the Year.

“I was so overwhelmed,” Rosie says, “Just shocked. But it shows that this company, they appreciate what you do. They acknowledge their drivers; they take care of their drivers.”

When asked how she came to join Tyson Foods, she smiles big and laughs. It’s kind of a funny story.

“I used to see the Tyson trucks on the road, and the drivers looked so content. I thought, ‘I don’t know what this company has got going on, but I’m gonna find out.’”

She’d been in the industry six years at that point and hauled loads for three different companies, but Rosie hadn’t found a home, a family. One day at a truck stop, a Tyson truck pulled in, and she asked the driver what it was like working for Tyson.

The driver talked about being taken care of, about extensive training and the priority on safety, about competitive compensation. Not long after, Rosie was sitting in orientation for another company but couldn’t stop thinking about Tyson. During her break, she called and applied over the phone. It was a Monday, she says. She’ll never forget it. On Thursday, Tyson called to schedule her orientation to become a Tyson Foods driver.

“That was the best decision I made, to come over to Tyson,” she says. “I’d never driven for a company that actually lived up to what they say. When they say, ‘We are family,’ we are family.”

And that meant a lot to Rosie, especially as a woman in a heavily male-dominated profession. She shrugs recounting some of the things she’s heard over the years: Why are you driving a truck? You’re taking work from me. Women don’t need to be truckers. Women can’t do it. You can’t do it.

“Just negative, negative, negative,” Rosie says. “But that just made me want to drive even more.“ And at Tyson, she says, there’s only ever been support and encouragement, so she works to spread that word everywhere she goes.

“This is my dream career. I tell women all the time to come on – and to come to Tyson. You will be missing out if you don’t.”

While Rosie didn’t win Driver of the Year, she keeps looking ahead.

“I want two million safe miles,” she says. And when the time comes to retire, she knows the last truck she steps out of will be a Tyson Foods truck.

“This is the company for me.”