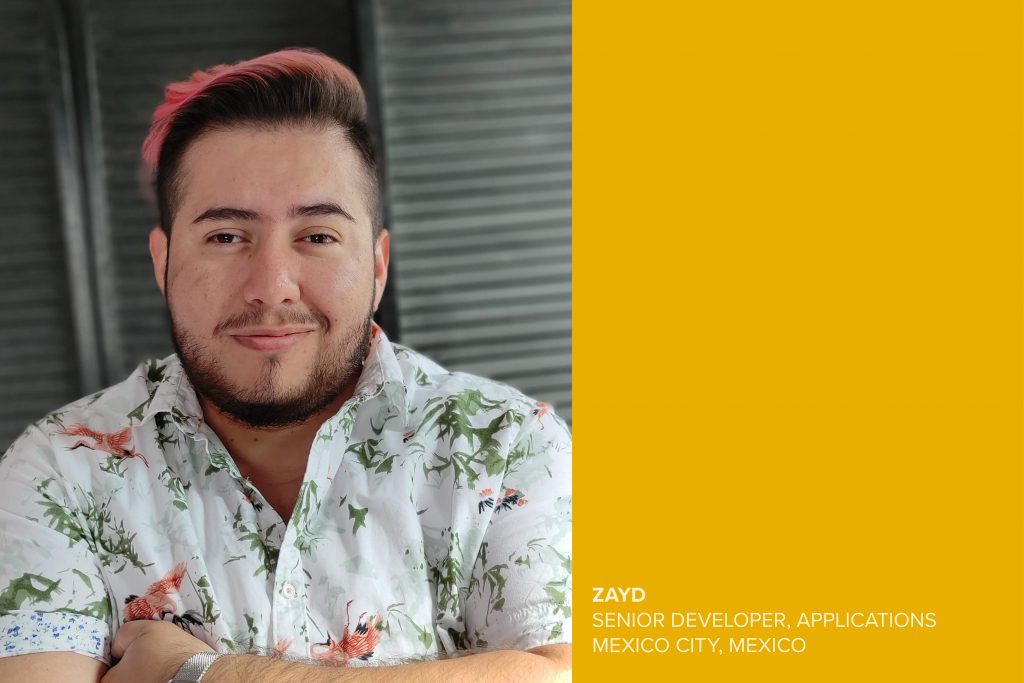 17 May“My Future Is to Keep Growing:” A Team Member’s Journey 

Zayd is a man who perseveres.

He first learned about Tyson Foods through a career conference at his university, Universidad Autónoma de Coahuila in Torreon, Mexico. He knew it was a place he wanted to work and eventually found a fit with the company in 2016.

It was an exciting challenge, and Zayd welcomed the chance to connect with team members around the world and learn from teams in India, China, and the U.S.

In 2018, about a year and a half into his career with Tyson, Zayd began another journey.

“Transitioning, or the idea I was a trans person, didn’t exist for me. I just thought, ‘Oh, I wish there was a way I could really show what I’m feeling right here or right here,’ he says, pointing to his head and his heart.

For a long time, Zayd didn’t have the language to know how to live as the person he knew he was, to know what was possible. In the U.S., he says, people are talking about trans rights and trans people, and there’s representation. “You get to see real people.” But it’s not the same in Mexico, a country where, Zayd says, the LGBTQ+ community is still battling for visibility.

He was excited to learn about being transgender, but there was also fear. Fear of his family’s reactions, his coworkers, the everyday choices and necessities most take for granted – like which bathroom to use – and the very real concern for his safety.

But his mental health and happiness were at stake. He knew he had to move forward.

Once he began seeing the physical changes from his treatments, he decided it was time to talk to his fellow Tyson team members.

“I talked to my general manager at the time, and he said, ‘Not a problem. We will do anything you need to help.’”

His Tyson management team stepped up to help with his social transition, ensuring a safe and respectful work environment for Zayd at every step of the process, from pronouns to paperwork.

“Tyson works to make a safe environment for everyone. No matter if you’re LGBTQ+ or your religion or whatever else – that’s the culture,” Zayd says. “And it’s something that has been built across the years and you can see it reflected. I had the opportunity to see it for myself when I transitioned, and I’m grateful. Most trans people in my country really struggle to even get a job.”

He has hope, though, that Mexico will catch up, and while he’s open to conversations and questions about his transition, he wants people to understand that not all experiences are the same.

“For example, a trans girl will have a totally different experience in the world. For me, it was simple. One day my manager said, ‘He’s transitioning, he’s going to start using the male restroom, and I don’t want to hear any complaint about that,’” he says. “It’s just like asking any heterosexual person about any heterosexual experience and expecting they will have the absolute truth. That’s not how it works. We’re humans. We’re complex.”

Recently, Zayd was promoted to senior applications developer, and he continues to look onward and upward – with Tyson.

“My future is to keep growing.”

Created in 2004, the International Day Against Homophobia, Transphobia, and Biphobia celebrates sexual and gender diversities and calls attention to the violence and discrimination experienced by many in the LGBTQ+ community. May 17 was chosen to commemorate the World Health Organization’s 1990 decision to declassify homosexuality as a mental disorder.

At Tyson, we cultivate an inclusive workplace, supportive of all team members regardless of their race, color, national origin, religion, age, disability, genetic information, sex (including pregnancy), sexual orientation, gender identity, veteran or any other protected status. Everyone is valued for the experiences and perspective they bring to our table – and we know we’re a better, stronger company because of it.