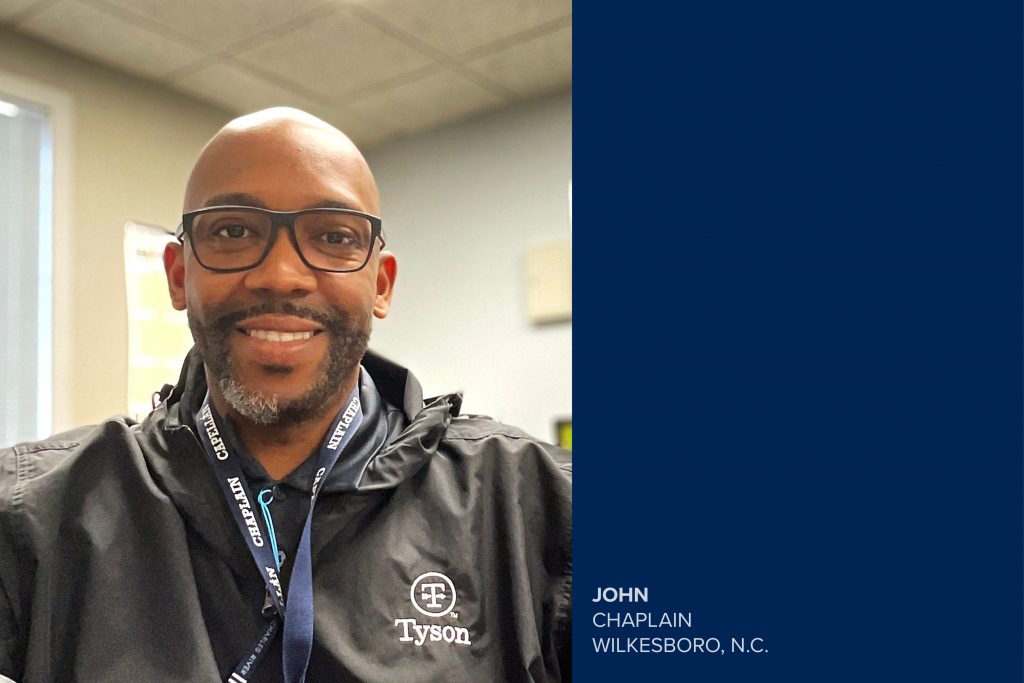 21 Feb“Not a Destination, But a Bridge:” Wilkesboro Chaplain Opens Doors for All 

John always knew he wanted to work with people. Before finding his home in the chaplaincy program at Tyson Foods, he spent 18 years as a pastor and worked as a police chaplain. As he finished up his Master of Divinity studies in 2015, he began looking into military chaplaincy programs.

But what he really wanted was a chance to engage with everyday people every day. That’s when a friend suggested he apply at Tyson Foods. Immediately, John felt Tyson Foods was the place for him.

“[Tyson Foods] is just a Godsend as far as dream career,” he says. “I found this opportunity in the heat of the pandemic, and I ran toward it because I saw the need. And being here, being able to see everyone give day in and day out and put themselves in a space to produce for their family and feed the nation as a cause – I wouldn’t want to be anywhere else.”

As a Tyson Foods chaplain in Wilkesboro, N.C., John works with team members across three facilities every day, helping them focus on their physical, emotional, and spiritual wellbeing.

“[A chaplain] is not a destination, but a bridge,” he says, “being able to help someone through their storms.”

And it’s important to John to meet people where they are. While he loves being in the workplace and injecting positivity into the day-to-day, he also uses digital channels, text, QR codes and social media to not only connect with team members but also celebrate their achievements.

He’s also created a WIN video series – which stands for What Is Necessary – as a way to encourage team members, tackling everyday issues like unconscious bias, challenging norms, diversity, and others. It’s important, says John, to be able to engage people on the go.

“What I enjoy about this is every conversation is just that, being a voice and an ear, a laugh or a smile in good times, and a shoulder to cry on,” John says.

Being a bridge also includes connecting Tyson’s diverse workforce to the resources they need and acting as a liaison between Tyson and the local community. He’s currently working with community members and entities on food donation events, programming with local public schools, helping Afghan refugees get established in the community, jumpstarting work release programs, and other workforce development initiatives.

Another program John’s passionate about is establishing his Wilkesboro locations as Recovery Friendly Workplaces (RFW). The initiative with RFW provides a direct link to resources and support systems for those recovering from addiction.

“We can get [team members] to a space where they can work as well as being in recovery,” John says. “They’ll have access to meetings and the resources they need while being able to live and take care of rent.”

It’s just another example, John says, of how Tyson is a positive place to work.

John is currently at work on his doctorate degree, focusing his research on chaplaincy programs in corporate America.

The Tyson Foods chaplaincy program began in 2000 and provides compassionate pastoral care to team members and their families, regardless of their religious affiliation or beliefs. The program includes full and part-time chaplains who informally make themselves available to talk to team members.