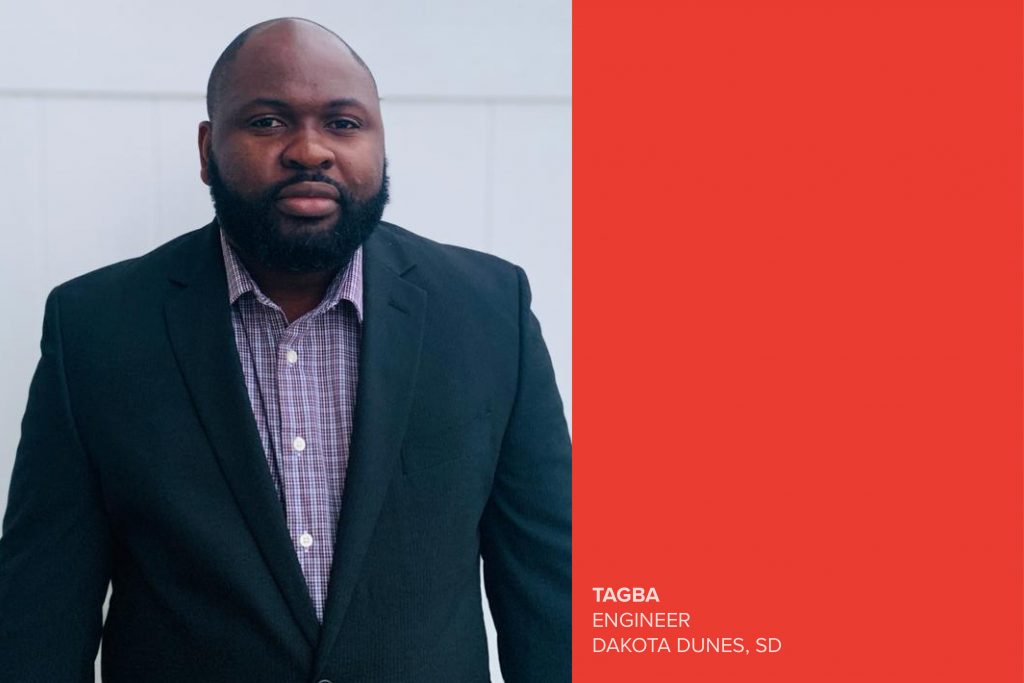 Tagba met a lot of people as an Uber driver in New York City.

“They would get in my car, and we’d talk, and they’d say, ‘You are too educated to be driving a car.’ And my response was always, ‘Are you going to pay me what I deserve?”

There were a lot of “cab ride promises” – email addresses and numbers exchanged with assurances of follow ups and resume reviews. They never amounted to anything. It was a frustrating time.

Tagba and his wife had immigrated to the U.S. from Togo, west Africa in 2012. Growing up there had been challenging, but not for reasons most people usually think.

“When we talk about Africa, a lot of people think of poverty,” Tagba says. “But my father was in banking and my mother was a businesswoman – we had everything we needed.”

The limitations, he says, came from his country’s history of colonization. He felt restricted by his lack of English – he spoke and thought in French – and exposure to the world at large. He told his father he wanted to pursue his studies in English, so he completed his undergraduate degree in engineering in Ghana before coming to the U.S.

“I thought that by having a degree, it would be easy for me to get a job,” Tagba says. “But that wasn’t the case.”

His first job in the city was as a store stocker, loading and unloading deliveries, before moving into a recruitment position. But he knew he wanted more, so he invested in furthering his education and enrolled in a master’s degree program at New York Institute of Technology, turning to Uber to better accommodate his schedule.

“I knew I was not going to be driving a car forever. I just needed the opportunity.”

He found that opportunity in Iowa.

After one of his in-laws encouraged him to come visit, he felt Iowa was the right place to raise his family. It was unbelievable, he says, how easy it was compared to the big city of New York. He applied for an apartment and was approved the next day. He sent out some job applications and quickly had several interviews lined up. He was excited that his kids would start school there.

When his cousin was also struggling in New York City, Tagba encouraged him to come stay with his family in Iowa. Three weeks later, he told Tagba about this company he started working for called Tyson Foods.

“One day we had a chat and he said, ‘Brother, you have so much education in your background, and Tyson is looking for that. You should apply.’ So, I did.”

Though Tagba was working in banking at the time, he applied for a few positions at Tyson – one of them being enrollment in Tyson’s 1+2 Maintenance Program.

“I had come in for a truck driving interview, but they said, no, you have potential for this [program.]”

Nine months later, he completed his classes and started as a packaging mechanic. Seven months after that, he was promoted to a project planner position. He also began working on his Ph.D.

“People were asking me how I was doing it all,” Tagba says. “For me, the sky was the limit.”

Now, Tagba works in our corporate office in Dakota Dunes as a project engineer. He’s set to complete his Ph.D. in technology and innovation management this year – and Tyson Foods has been helping through our tuition reimbursement program, covering $6,000/year of his associated fees.

“Tyson gave me a lot of opportunities and is still giving me opportunities,” Tagba says. “It’s the right place to be when it comes to caring for people because we are a family at Tyson. Being at Tyson is like being at home.”

And Tagba continues to aim higher. So, what’s next?

“I want to make an impact. Tyson transforms people’s lives, and I want to be part of that change.”

Tagba’s story is proof that no matter where you are, or where you come from, you can find a home at Tyson. In the 1+2 Maintenance Program, team members split their time between classroom education and hands-on experience in the plant. They are considered full-time team members, paid 40 hours per week and eligible for full benefits.

“I told one of my cousins about the 1+2 program and that it was how I got my start. I said, ‘Show Tyson what you can do, and they will open doors for you.’ He called me a few weeks ago and said he has a job. I told him, ‘Just wait and see what Tyson can do for you.’”