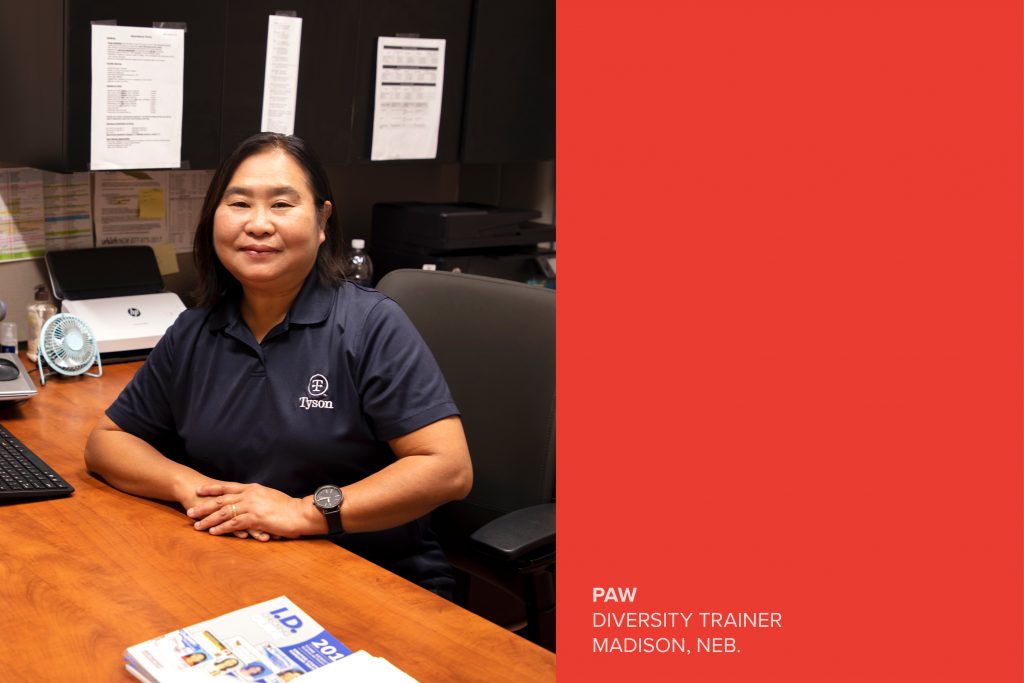 I admit, I wasn’t prepared when I sat down to talk with Paw. I had my questions; I’d done my research. Paw and I had been chatting for several weeks leading up to our meeting, getting to know each other, and I thought I knew something of her journey and how she came to be at Tyson Foods.

I knew she was from Burma, what others call Myanmar, and had been a midwife and village leader there. I knew her journey had not always been easy. I knew her experiences as an immigrant helped her do the incredible work she does today, with team members at our facility in Madison, Neb.

This is her story.

Paw was born in a small village in the Karen state of southern Burma. The country has been in a state of civil war since its independence in 1948 – the longest ongoing civil war in the world – with several ethnic groups, rebels, and the Burmese military involved in the fighting.

Early on, Paw knew she wanted to help people, and this desire became the driving force of her life. It’s what makes her so passionate about helping fellow refugee and immigrant team members at Tyson, providing resources and aid as a diversity trainer.

“I wanted to help, and as a midwife I got to help two lives,” she says. “I delivered more than 200 babies. Never lost a baby. Never lost a mother.”

For 17 years she cared for the women and children in her home village and the surrounding area. To call it a full-time job is an understatement.

She was on standby always, walking to and from patients’ homes day or night, in good weather or in the rainy season. She tells me about sleeping on bamboo mats on the floor next to expecting mothers. There are a lot of little Paws running around the village, she says, named after her. She shows me pictures from her college graduation day, another of her in a nurse’s uniform on the steps of a hospital, and one of her with her arms around her two children, elbow-high at the time.

The stories spill out. In a quiet, even voice Paw talks about taking a woman to the hospital after complications during birth – walking in the nighttime, in the absolute darkness only found in places without electricity – and being shot at as they approached the hospital. During another birth, a rocket-propelled grenade (RPG) exploded next to the home, forcing Paw, the mother, and the just-born baby to flee to a bunker.

Paw also administered vaccines to children in her area, carrying much needed polio and measles vaccines from village to village in an icebox on her back. She would often get caught in the crossfire of her country’s ongoing war while traveling, lying on the ground as shots fired over her.

She would wait it out, and then keep walking because the kids needed those vaccines. “At times I was so tired, so tired. I did as much as I could.”

She found herself many times – too many times – trying to treat gunshot wounds. Like the time one of her childhood friends was found with two bullet holes in his back – Paw reaches over her left shoulder and around her right side to show me where he was hit. She helped pull him from the river. All night she cleaned his wounds and tried to stop the bleeding, eventually just sitting there with him as he passed. She was 26 and eight months pregnant at the time.

There were other stories of those who couldn’t be saved.

“I was scared, too,” she says, “because I could get killed anytime. I said, ‘God help me, give me wisdom.’”

Eventually, Paw made the decision to leave Burma. “I told my mother I had to leave, and she was crying, but my heart was almost broken. I didn’t want to see anymore.”

In 2006, she and her husband and her two children fled and walked to refuge in Thailand. While in the refugee camp, she earned a certification in fighting gender-based violence. When her family immigrated to Chicago in 2008, she continued this work as an employment counselor serving the Burmese refugee community for the Pan-African Association (PAA).

“A lot of our team members have come from civil war areas. They haven’t had a chance to go to school or have a job or buy a house,” Paw says. “After hours, nighttime, whenever they call – I’m happy to help them.”

As an associate diversity trainer, Paw uses her experiences to help other immigrant and refugee team members grow and thrive, assisting in housing, education, and navigating paperwork and finances.

When she saw team members struggling for citizenship, she realized the closest resource was two hours away – too far for many of her team members to travel. So, she advocated for the Karen Society of Nebraska to open a local branch to help team members at her facility – which has a large Burmese population. Tyson supported the project and gave a grant for the new branch.

“Tyson helps the community here,” Paw says. “The goal is for refugees to stand on their own in a new country.”

Paw has found peace and purpose. Her two kids serve in the U.S. Army – “It was important to them that they give back to the country that has helped them,” Paw says. Her son recently got married, and Paw got to experience her first American wedding. She wasn’t sure about the mother-son dance tradition, but her son reassured her. “’Don’t worry, mama,’ he said, ‘I know. I’ll show you how.’” Her daughter runs a local Burmese foods market and just graduated from business school.

“I thought about my whole journey of coming to the United States,” she says, remembering her daughter’s graduation day. “My dream was for my kids to be educated in this country and seeing my daughter graduate – I’m very happy.”

Our team members represent countries from around the world, and as many as 11 languages are spoken at a single facility. This diversity is our strength; the lives we all lead – before Tyson and at Tyson – enrich our company and make it a place brimming with opportunity, where everyone can find a home.