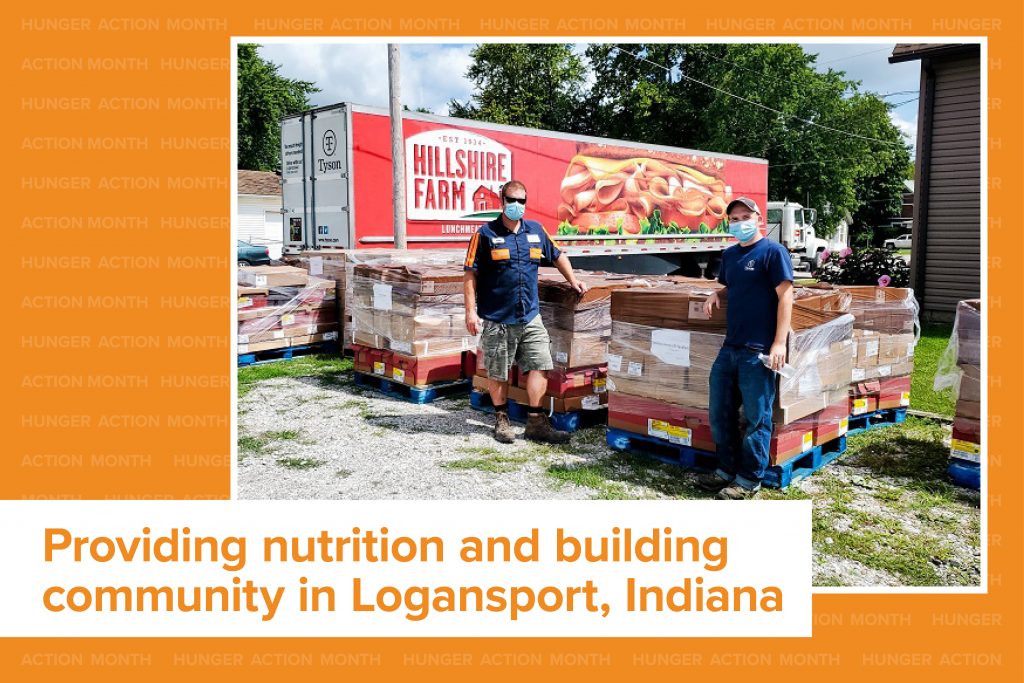 This Hunger Action Month, we’re profiling Tyson Foods grant recipients that provide essential nutrition to those in their community. The second of these profiles features Emmaus Mission Center in Logansport, Indiana. Here’s an overview of their work, written by Executive Director Jason Mitchell.

In December 2016, Emmaus Mission Center was blessed with the donation of a building. The former machine shop was just one block away from our thrift store and food pantry and was filled with a jumbled collection of old diagnostic equipment, used tires, tools and wiring, and a layer of oil and grime from years of sitting vacant.

Walking through those dimly lit, dust-filled rooms on a cold winter’s day, our minds raced with possibilities.

Three years later, in January 2020, we opened our new food pantry to the public.

The realization of this dream was brought about through the generosity of many community partners and the kindness of individuals and businesses who saw the need to invest in solving the issue of food insecurity in our county.

One of our major financial contributors was Tyson Foods, which provided us with a $30,000 grant.

With Tyson’s corporate backing, we were able to resurface the dirt-stained floor of our service area with a smooth gray epoxy coating and sealant and, a few months later, purchase and install a walk-in cooler with a capacity to store ten pallets of refrigerated product.

Building on this benevolence, and through the efforts of local Tyson Chaplain Alex Beane, we gained the ability to become a distributor of Tyson Foods product in a larger way than ever before.

We have been a Tyson Community Pantry Program (CPP) partner for a little over a year now, creating a network of 41 other food pantries in our region and distributing over 250,000 pounds of Tyson protein.

Many of these pantries expressed, even before the start of COVID-19, that they were in dire need of good quality protein. Some of them were even at the point of closing if they were unable to access more meat.

Tyson Foods has helped pantries like our network stay open and serve residents in crisis. This year, we have seen an 86% increase in pantry usage to an average of 944 food distributions per month.

Garnering the support of a company like Tyson Foods is a huge blessing and something we cherish greatly.

One of Tyson’s core values is to serve as stewards of the resources entrusted to them. Through CPP partnerships, this value becomes a reality. And when people come together to tackle issues and concerns in their towns, cities and counties, true community is built.

Emmaus Mission Center is just one of the many local organizations Tyson Foods is proud to support through grants and donations. This year, we’ve been able to give more than ever before in a year of unprecedented need.

In the last 12 months, we’ve donated more than 30 million pounds of protein, or the equivalent of 120 million meals, to fight hunger nationwide – a record over our 85 years as a company.

These donations were felt across the nation, among our team members and in the communities where we operate. Healthcare workers, summer feeding programs, mobile pantries and backpack programs were also supported in Tyson communities.

And, we were able to provide nearly 20 million meals alone to Feed the Children, with whom we share a longstanding partnership.

“Our company is proud to play a critical role in feeding the nation during this challenging time, and we recognize the importance of supporting our team members, their families and our plant communities,” said John Randal Tyson, chief sustainability officer. “We’ve focused resources where we can generate the most impact and support organizations doing heroic work on the local level.”

We invite you to read more about the ways we’ve come alongside those in our Community Pantry Program, non-profit organizations and teachers near Tyson Foods plant locations, and team members via our latest press release. Through these efforts and more, we can show the world how much good food can do.