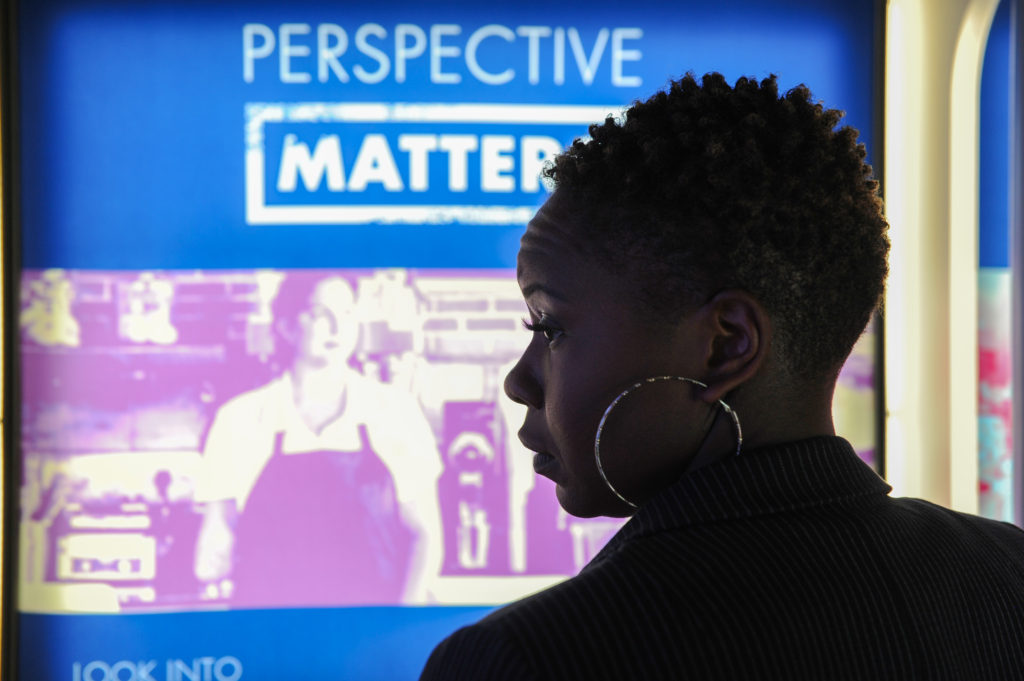 I’m a 50-year old white male. I grew up in the South, raised by a single mother who taught me to open doors for women.

Just from that little bit of knowledge about me, I bet you already have some preconceived notions about who I am and what I believe.

That’s a natural response. Because no matter how diverse or inclusive we may think we are, we have all struggled with unconscious bias at one point or another.

Unconscious bias, or a “blindspot” is the gray area of discrimination—when we don’t explicitly or intentionally do or say something offensive to someone who is different than us, but implicitly and subtly do or say something based on a stereotype we’ve made up in our minds that we may not even be aware of. It’s those moments when someone else points out our own actions and we say, “wow, I didn’t even notice I was doing that.”

I recently had the opportunity to reflect on my own unconscious biases thanks to the CEO Action Check Your Blindspots mobile tour during its stop at the Tyson Foods World Headquarters campus in Springdale, AR. The interactive bus has a schedule of 100+ stops across the country to educate folks on unconscious bias and encourage organizations to take action on diversity and inclusion efforts.

I’ve been fortunate during my 27 years at Tyson Foods, especially working in our poultry business, to have been exposed to a lot of diversity, but my mission is continuous improvement—not only personally, but for Tyson Foods as well.

Put the right tools in place.

When it comes to educating people on diversity and inclusion, I’m a proponent of “show, don’t tell.” I believe the most useful tools we can use are visual or interactive learning experiences. We could have meeting after meeting where leadership talks about the need to do something. We could put together deck after deck of technical terms and strategic approaches. But I believe “a-ha” moments truly happen through visual learning.

Bringing the CEO Action bus on campus and allowing team members to have that first-hand experience is a huge step in the right direction and will hopefully act as a catalyst for more people to open up about unconscious bias. Another one of my favorite examples I’ve seen is a video our communications team created in celebration of International Women’s Day: “Why Not Her?” By showing unconscious bias in such a touching way, people take something special away from that video that they wouldn’t otherwise take away from a PowerPoint presentation.

Have the hard conversations.

It’s on senior leadership to embrace the uncomfortable conversations and keep the mission high at all times. The mission is educating team members and growing their ability to understand unconscious bias, and sometimes that leads to difficult conversations. It’s also the responsibility of every team member in this organization to put themselves in a position of objectivity, because wherever there is lack of knowledge, there’s the potential for something offensive or hurtful to be said. These are teaching opportunities. We need to be open to the possibility that our feelings could get hurt and use these discussions to educate as opposed to putting up walls.

The world is becoming more diverse and inclusive every day. Our country is a melting pot of different colors, cultures, religions and orientations. Setting an example of acceptance and speaking up about bias or discrimination isn’t a business objective for me—it’s personal. Embracing the differences of others and seeking to understand instead of going on the defensive just makes up better people.

Perfection is not attainable. Blindspots will always exist, whether in a personal capacity or within an organization. But I know we will never come as close to perfection as we can if we don’t push hard to get there. It’s that challenge of hunting out those blindspots, no matter what they are, and taking action. And action is not simply saying we’re going to make a change and putting it on a checklist. It’s a journey. It’s continuous improvement.

My hope for the future of Tyson Foods is continuous improvement, and I believe that lies in the hands of our people. If we ever want to be the greatest place on Earth to work, we have to embrace all people and move forward with that mindset. As long as we’re willing to champion that mindset, I’m confident we’ll get there.

Doug has been a member of Tyson Foods’ poultry business since 1992 and was named president of global McDonald’s business in early 2019. In this role, he is responsible for leading the relationship with one of our key customers.

He is a member of Tyson Foods’ enterprise leadership team and reports to President and CEO Noel White.

Prior to his current role, Doug served as group president of poultry, president of Poultry Operations, and senior vice president of Big Bird and Fowl, Value Added. As group president of poultry, Doug drove earnings growth and poultry market share through integrated planning, business strategy development, operational execution, and innovation. Doug’s background working with the company’s international business, marketing, logistics, and operations, has enabled him to understand how the Tyson Foods’ total business fits together and how to deliver results.

A servant leader, Doug believes in developing others to enrich their lives and to benefit Tyson Foods’ overall culture. Doug is a champion of team member safety and sits on the company’s Executive Safety Council, which is dedicated to fostering safety improvements throughout Tyson Foods.