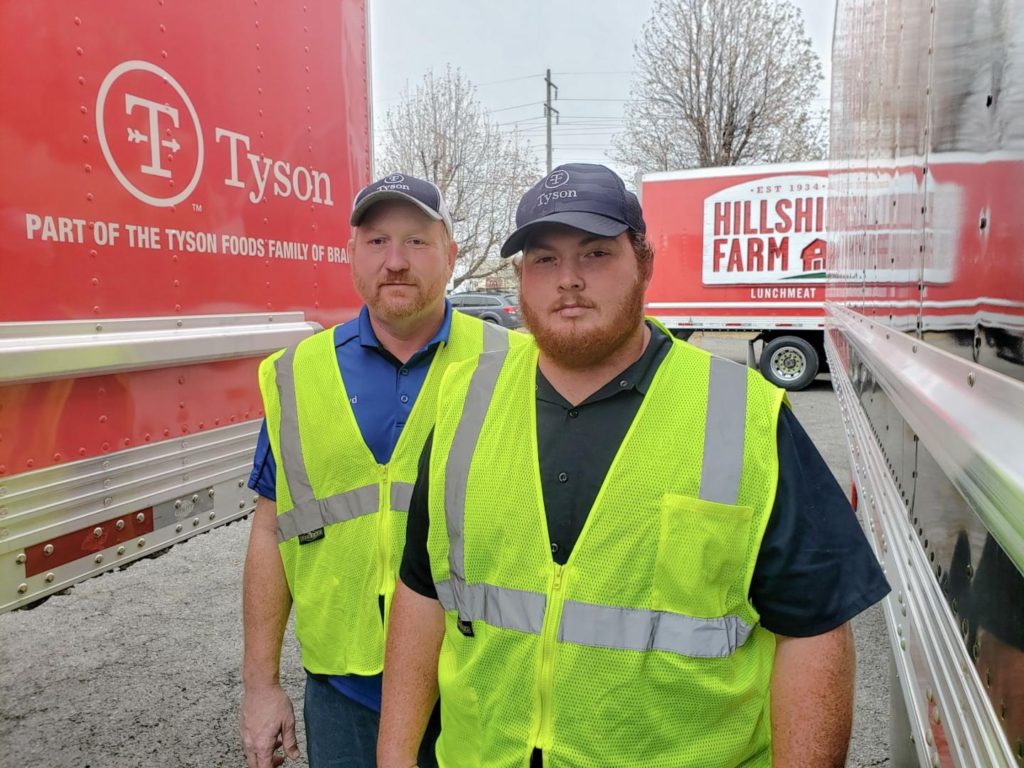 For the Tyson Foods father and son driving team Loyd and Zane Frost, commercial driving is more than a job: it’s the experience of a lifetime, a way to see the world and a continued tradition of family and stability, together.

Zane’s stories of driving cross-country with his father highlight the excitement of traveling through different states and seeing new landscapes, especially the mountains. Loyd, a seasoned driver, is quick to express appreciation for the time he gets to spend with his son as they share the road.

Over 26 years, Loyd has completed more than 2.6 million driving miles. This February, he celebrated his fifth year as a Tyson Foods team member with more than 300,000 safe miles under his belt–the equivalent of driving from Springdale, Arkansas to Alaska more than 80 times.

Their career-driven relationship creates added bonding time for the two, with a unique focus on safety. Loyd’s earned safe miles come with many lessons he’s shared with Zane: don’t speed, drive safely, focus on getting there–not beating “record timing.” According to Loyd, he has never run into an instance where Tyson Foods didn’t allow for enough time to complete the job in a safe and reasonable manner.

As the youngest over-the-road driver that Tyson Foods has ever employed, 21-year-old Zane utilizes knowledge passed down through understanding, value, and trust. Continuing down the path in driving, he’ll leverage top safety training and emerging technologies to build a successful career.

For the Frosts, driving has led to a fulfilling career for Loyd, a lifetime of opportunity for Zane, and a sense of belonging to the Tyson Foods family for a father and son.

For Zane, and most others after high school, life presented three options for pursuing a career: continue on to college, join the military, or enroll in trade school. Thanks to his father, he knew there was another option: commercial driving. Even though commercial driving provides opportunity to people of all ages, backgrounds, and preference, this rewarding, stable career path is often overlooked.

But there are many reasons to consider driving for Tyson Foods.

Drivers play a critical role in our business and we keep our salaries competitive, recently INCREASING PAY BY AS MUCH AS 15%, and provide various benefits, as well as innovative technologies focused on health and safety to help ensure that we’re able to attract and retain top talent. Since 2015, we’ve held monthly meetings with the Tyson Foods driver advisory board to maintain integrity and satisfaction across the fleet.

Tyson Foods’ next-generation technological capabilities span everything from automated sensors and blind spot monitoring to driving simulators that lead to incident reduction and added confidence on the road.

Whether we’re working with a seasoned driver like Loyd, or a rookie like Zane, we’re constantly looking for ways to train and create safer conditions for our drivers. A couple of examples include:

This is just the tip of the iceberg for how we’re putting safety first. For many, driving with Tyson Foods turns a career in to more than just a job.

Learn more about joining our team today:
• MORE INFORMATION ON DRIVING FOR TYSON FOODS
• APPLY TO BE A TYSON FOODS DRIVER TODAY
• Call a recruiter: 1-800-933-6442

Pat Coonce is the Associate Director of Risk Management for Transportation at Tyson Foods. In this role, Pat leads the team responsible for driver recruiting, training, safety, and compliance for the Private Fleet’s refrigerated division.

A veteran, Pat enlisted in the Navy in 1985 and joined Tyson Foods in 1991 as a dock worker at Tyson Distribution Center (TDC) in Rogers while continuing his military career with the Navy Reserve and enrolling in his first semester of college. He transitioned from warehousing to transportation in 1996 and has held various positions at the Springdale Terminal serving both our internal and external customers. Pat received a degree in Mathematics (BA) from the University of Arkansas in 1999 and retired from the Navy Reserve as a Chief Petty Officer in 2008. He embraces change and enjoys the challenges associated with making things better for his coworkers and customers.

Pat met his wife Ruth while working at TDC and they are in their 26th year of marriage. They have two daughters (Kira and Mary), one son (Paul), and one granddaughter (River). Pat loves the water, whether ocean, lake or stream. He and his wife live on Beaver Lake in Garfield, AR and spend most weekends on their boat with family and friends.