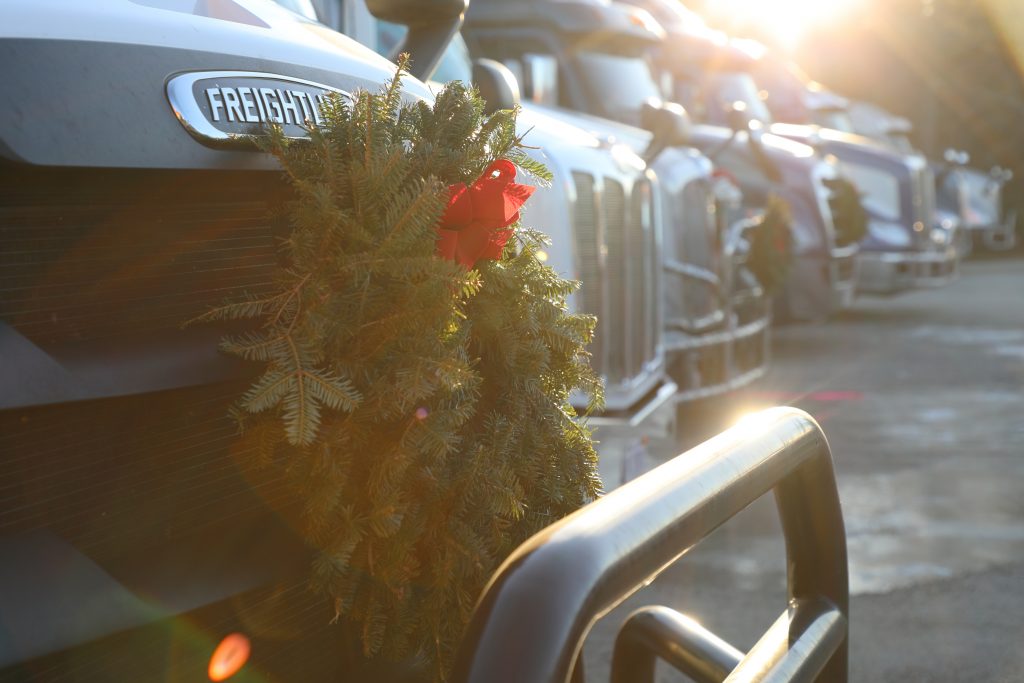 We arrived in Maine to 14-degree weather and winds, and after a quick lunch at a local spot, The Eagle’s Nest, we were off to the Wreaths Across America headquarters and museum.

On the way to the museum, we took a pitstop at the cook house where Tyson Foods cook teams had been preparing meals all week for drivers and prepping food for the evening’s banquet. It was warm and toasty inside as drivers caught up over hot coffee and food. One Tyson driver was getting a haircut from his wife, another – a Marine Corps vet – talked about ironing everyone’s shirts the night before. Trucker hats lined the walls. The story is that in the early days, Wreaths Across America founder Morrill Worcester would take the hats from drivers as they came through to load up and add them to the shelf and give them a Wreaths Across America hat in exchange.

After a walk through the museum, we went to Narraguagas High School for the opening banquet. Volunteers, veterans, drivers, and family members filled the gymnasium. Quilts of Valor were presented – one to a WWII veteran, Florence – and the scope of Wreaths Across America could be seen and heard and felt as drivers lined up to say where they were heading, the line of drivers wrapping around the gym. Over the course of this week, they’ll have delivered nearly three million wreaths.

“The mission is to remember, honor, and teach,” said Executive Director of Wreaths Across America Karen Worcester. “The corporate support of a company like Tyson – we absolutely could not carry out our mission without the trucking industry and generosity. It’s just priceless.”

The next morning, we met our drivers back at Narraguagas High School for safety briefings before departing. There were hugs and smiles and wishes of safe travel – and excitement. I loaded up with Tony “Dallas” Aponte. He’s been driving with Tyson for 42 years and has the most safe miles of anyone in our fleet at nearly 4.8 million miles (that equates to driving around the world, without incident, 192 times). He made drops to Long Island, Staten Island, and Jersey City. I asked him what the drive was like.

“It’s an incredible experience,” Tony said. “People stand all along the road. They’re waiting for you at the cemetery. I can’t even describe it.”

As the convoy started rolling out, it began to snow.

The drive to the first stop in Ellsworth, Maine, took over an hour. Mainers lined the street along the way. Some stayed snuggled in the cars, honking and waving as we passed. Others braved the cold with signs of encouragement and support. One group – three children and an older gentleman with a cane, wearing a military jacket and hat – stood at salute as we passed. A little girl jumped on a trampoline holding an American flag. As the convoy progresses, drivers will peel off to their destinations while one group heads to Arlington National Cemetery.

Driver James Jackson, a Marine Corp vet, talked about the importance of remembering our veterans, and what it means to have the support of Tyson Foods. “I am honored to be working for a company that honors and does this kind of activity and respects what this means to veterans across the nation,” Jackson said.