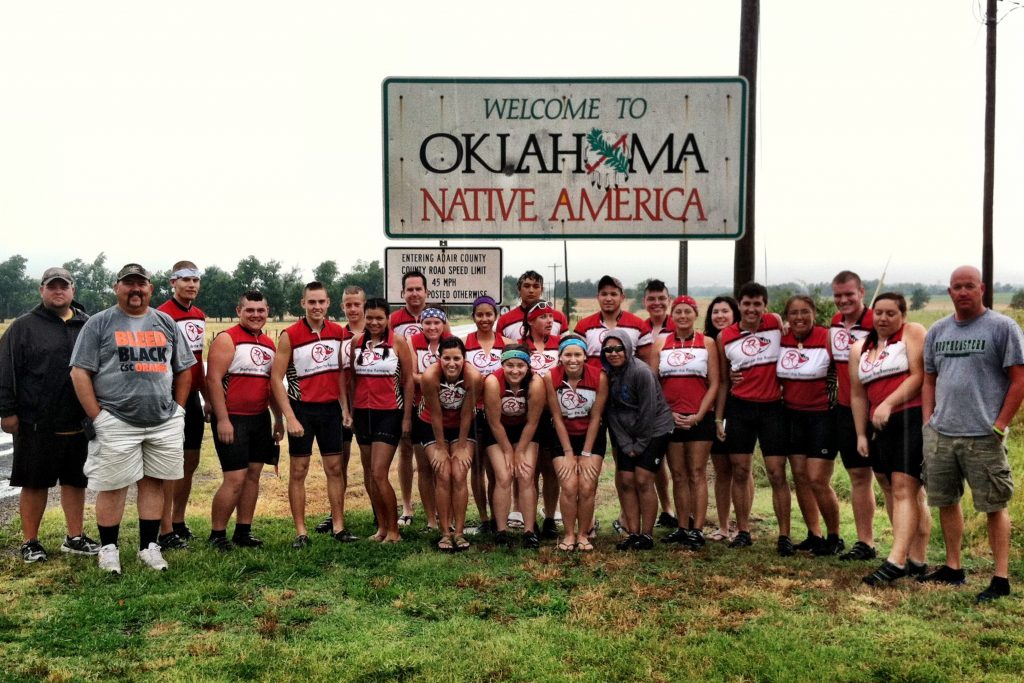 When November comes around and the holidays are approaching, I get excited because it means I will get to spend time with family and friends during a joyful time of year. While this is true, I also want to be mindful and remember that it has not always been so cheerful for the indigenous people in our country.

For my Cherokee People and others of the Five Civilized Tribes, Thanksgiving means something more than abundant food and much anticipated football games. For indigenous people, Thanksgiving often means reflecting on our history in this country.

Before any of the early European settlers came to what is now known as the United States, indigenous people had been here for thousands of years.

In 1830, The Indian Removal Act was signed into law allowing for the forced removal of nearly 60,000 Native Americans to newly allocated land west of the Mississippi River. This brought extreme hardship on many Native people as they were forced to leave everything behind and move to new territory, losing many lives along the way during some of the coldest winters on record.

In the winter of 1831, the Choctaw tribe was the first to be expelled from their native lands by government enforcement, and from there it was a domino effect. The Seminole were next in 1832 with the Creek and Chickasaw to follow shortly after in 1834 and 1837. An estimated 11,000-14,000 people from these four tribes died along their forced journeys to the new territory.

The Cherokees held out as long as they could, actually winning their case before the U.S. Supreme Court. However, when gold was discovered in Georgia, it wasn’t long before they would also be ordered off their ancestral lands by President Andrew Jackson. They made the seven-month trek from Georgia to what is now present-day Oklahoma in 1838. These events became known as “The Trail of Tears” or as the Cherokees call it, nu na hi du na tlo hi lu I (The Trail Where They Cried). Facing disease, starvation, and exhaustion from the bitter winter, it is estimated that of the 15,000 Cherokees who walked the Trail of Tears, 4,000 perished.

Although I wasn’t raised in a traditional Cherokee home, I choose to pay homage to my ancestors and immerse myself into their history. In the Summer of 2012, I was fortunate enough to retrace the northern route of The Trail of Tears by bicycle. In total, 23 Cherokee citizens, including myself, embarked on a 950-mile journey that would span three weeks.

After meeting our brothers and sisters from the Eastern Band of Cherokee Indians and being welcomed to what is now their Capital in Cherokee, N.C., we started our ride in New Echota, Ga. We traveled through Tennessee, Kentucky, Missouri, and Arkansas, before making it back to what now is the Capital of the Cherokee Nation in Tahlequah, Okla.

The ride was a great learning experience for me as I visited important Native landmarks, campsites, disbandment sites, and even gravesites along the way. I will carry that experience with me for the rest of my life.

I am Cherokee by blood and, like most members of my family, I will be celebrating the holidays with the belief that better days and opportunities are before us as a people. There are currently 574 federally recognized Indian Tribes within the United States. We are focused on education and exploring ways to expand our business pursuits as well as our rich cultural awareness and contributions to society.

As with many Americans, the holidays are a time to come together, hunt, enjoy amazing food, fellowship, and the shared family history that brought us together. While my native ancestors endured unspeakable deprivation and hardship, they were joined together by many of the non-indigenous people in my family that also call Oklahoma home. I think it is important to recognize this shared history so that it is always seen as diverse. There’s more that brings us together than separates us going forward.

As Native American History month comes to a close and we enter this season of thankfulness and gratitude, I encourage others to become more aware of the role Native Americans play in our diverse society and remember: the origins of their enforced cultural assimilation did not end our tribal culture.

Sequoyah gave Cherokees their own syllabary and written language. They are as their standard bearer “The Phoenix.” They rise.

Analyst Applications at Prepared Foods IT, Tyson Foods
More from this author