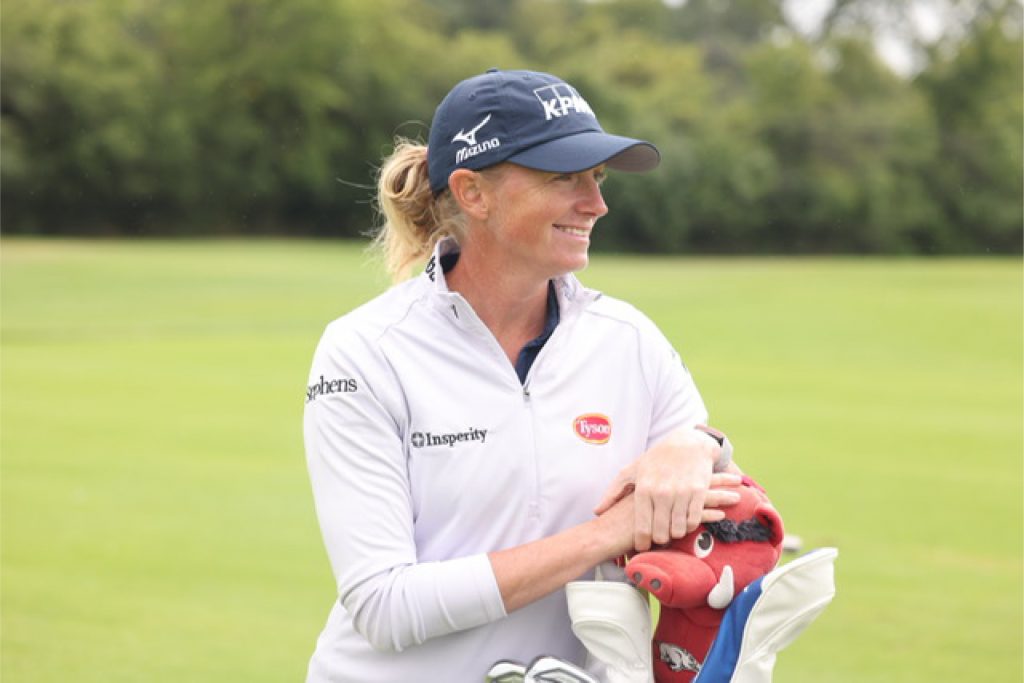 23 SepStacy Lewis Returns to NWA with Support of Tyson Foods

She wore a Razorback logo during her college career, now she’s a golfing legend proudly wearing the Tyson® brand logo. Stacy Lewis was an amateur and University of Arkansas senior when she took a first-round lead at the inaugural LPGA NW Arkansas Championship in 2007 and won the rain-shortened event.

Now, the Ladies Professional Golf Association (LPGA) star is back in Rogers, Ark. for the 16th playing of the Walmart NW Arkansas Championship Presented by P&G.

“It’s hard to believe it’s been 16-years,” said Lewis during an LPGA press event.  “I always love coming back this time of the year. The fall in Arkansas is probably my favorite.”

Sitting in front of television cameras in the LPGA media room at Pinnacle Country Club, Lewis is comfortable in the spotlight and admits, she feels back at home in Arkansas.

“I think of all the people who helped me get where I am today.  I wouldn’t be the person or the player I am if I hadn’t come to the University of Arkansas,” said Lewis.

Her ties to the natural state run deep, including her sponsorship with Tyson Foods.  She says she met Chairman John Tyson during college, and she immediately felt his encouragement.

“Before there was a Tyson logo on my shirt, he was a huge supporter of mine and has been over the years.  Now I’m proud to have this logo on my shirt and to wear it around the country,” said Lewis about her Tyson Foods’ sponsorship.

The 37-year-old has 13 LPGA tour victories and dozens of other awards and accolades.   She’s traveled the world golfing professionally and as her career developed, so did her personal life.  After marrying in 2016, Lewis became a mother four years ago to a daughter named Chesnee.

“She travels with me every week and she knows we are in Arkansas and that it’s a special place to me,” Lewis proudly said.

She said Chesnee isn’t quite old enough to understand her mother’s fame but described her as being mesmerized by so many Stacy Lewis pictures in their hotel and on the grounds of the country club. Lewis says she’s taught her daughter to call the hogs, even though they live in a house divided.

“My husband is the coach at Texas A&M so I’m always pushing the ‘go hogs’ to make sure she’s cheering for the right team,” explained Lewis.

Spending time seeing old friends while she’s in Northwest Arkansas for the championship, she’s also relishing the role of mentor.

“I had dinner last night with four potential rookies and I helped them feel more comfortable with the process.”

She describes the young women as being wide eyed and curious to hear all of Lewis’s advice and stories.

“I remember that process and it’s cool to see it through their eyes,” described Lewis.

While she travels from event to event, she dips in and out of nostalgia because so much of her life happened in Northwest Arkansas.

“We were at dinner last night talking about the first year of the tournament.  The Pinnacle exit wasn’t even here,” laughed Lewis. “It’s amazing to see the change to the community and how the community continues to support the event.”