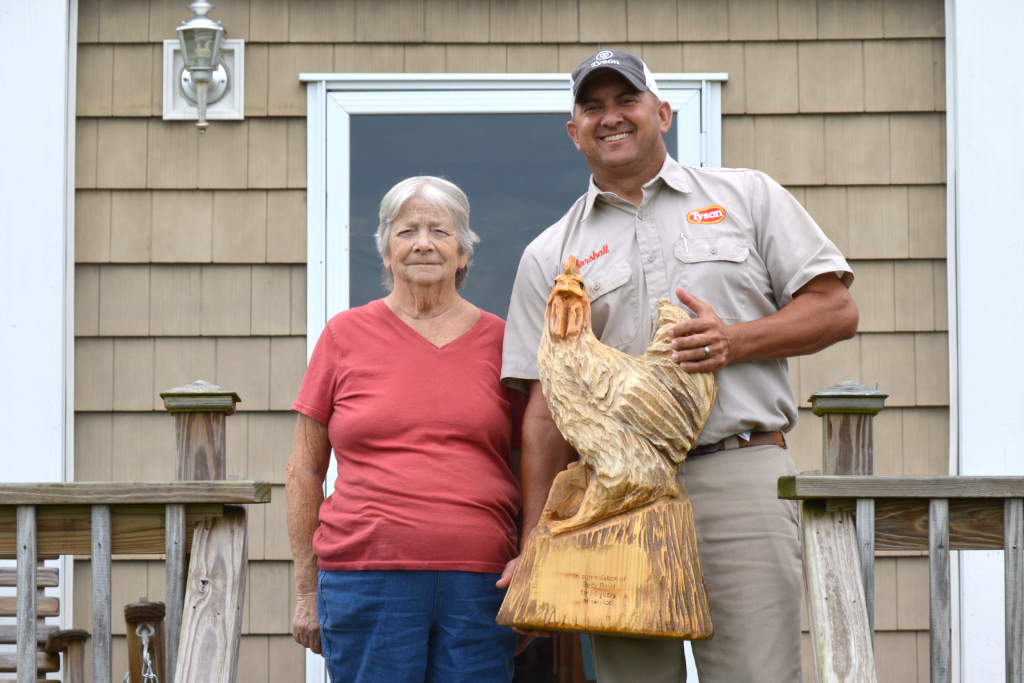 22 Jul‘It Was Just Part of My Life:’ Tenn. Grower Retires After 51 Years with Tyson Foods

These days, it’s rare for someone to stick with the same company for more than 50 years. But that’s what Betty Boyd did as a contract poultry farmer for Tyson Foods.

She started raising chickens for us 51 years ago in Hillsboro, Tenn. on a farm she acquired soon after her wedding in February 1970.

“I got married, had three kids, and life just took its course,” Boyd said. “I remember going into the houses to gather eggs while pregnant. It was just a part of my life. Before I knew it, 51 years had passed.”

Over the years, Boyd has witnessed a lot of change in the industry. When she first started, her chicken houses had coal-burning stoves. The feed bins were inside with hog troughs feeders, and she had to fill up glass water jugs to take to the houses. Gas heaters and water lines weren’t introduced until several years later.

She also has a ton of memories. But one that stands out was when Don Tyson visited the farm. Before his arrival, Boyd and her husband were debating about how the litter, or poultry bedding, was being scattered and, in the end, she won. After walking the farm, Tyson was complimentary of how good everything looked, including the litter. And that made Boyd’s day.

“Don Tyson was the sweetest person I have ever met,” she said.

Boyd says relationships were a key part of her experience with Tyson, and she credits one of her field technicians, Mark Harmon, with the knowledge of raising chickens he provided her. Field technicians, or servicemen, provide the technical expertise and guidance to help ensure growers like Boyd have healthy flocks.

If she had to pass on any advice to those starting out as growers, she’d say:

“Be honest and communicate with your serviceman, even when you have the same opinions. Being respectful of each other helps build a strong working relationship and produces better results for all involved.”

Harmon had equal praise to bestow upon Boyd.

“When I think of Betty Boyd the hen grower, honesty, sincerity, hard worker is only a few of the descriptive adjectives that come to mind,” he said. “Tyson could always feel confident Betty would give her best efforts, and the results followed. When I think of Betty Boyd the individual: very genuine in her concern for others first. A very compassionate person in every facet.Betty made servicing flocks a pleasure!”

Boyd retired this spring and says it definitely has its perks. She’s able to sleep in a little more – past the 4:30 a.m. time frame she’d wake up every morning to check on feed and water. Though she admittedly misses gathering eggs and getting visits from her serviceman.

Upon her retirement, Boyd was presented with a wooden chicken from the Shelbyville Complex in appreciation of her work (pictured). The chicken, named Francis, is on display next to the television so she can get a view of it when watching TV.​