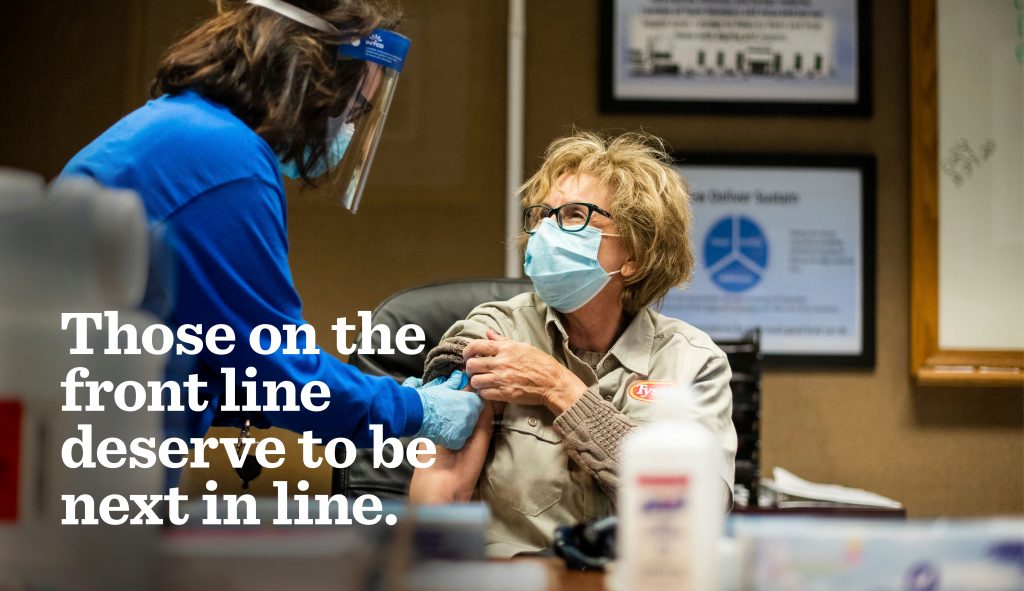 23 MarFor Those Who Have Kept Our Nation Running, Their Safety Comes First.

Carl McGrone walked into a Tyson Foods meat-processing facility in Iowa and was struck by how a hallway had transformed into a clinic. The usually sleepy room was buzzing with activity. Large tarps hung from clothing lines to form temporary examination rooms, and dozens of medical professionals mixed among his co-workers, the deep blue of their doctor’s scrubs nearly matching the color of his Tyson uniform.

He was there, like hundreds of others at the plant, to receive his COVID-19 vaccination, which the company was offering to all its team members free of charge. Even with a mask over his face, his eyes shined with enthusiasm. He was eager to gain additional protection against the virus, but his excitement was not just for himself.

“I chose the vaccine because I have a family at home,” said McGrone. “My wife was very happy, so I feel great about it.”

Tyson Foods has spent the last year working diligently to safeguard its 120,000 U.S. team members from the pandemic, spending hundreds of millions of dollars on everything from masks and barriers to testing programs informed by artificial intelligence. It is now undertaking a massive vaccination drive, which represents a new phase in its fight against COVID-19, one that it hopes will not only to keep the disease at bay but finally help to defeat it.

Some states granted food company employees early access to the vaccine, including several where Tyson has operations. Tyson is covering the cost of the vaccine if received privately and giving employees additional paid time off to get it. Yet, ultimately, the Springdale-based company felt the critical next step to ensure the safety of its team members was to encourage and provide vaccinations by offering them directly at its plants and offices.

“COVID has been a big challenge for all of us and helping our team members get access to it as soon as its appropriately available is the right thing to do,’” said Tom Brower, senior vice president of Health and Safety for Tyson Foods. “It’s important to me that our team members get vaccinated because they’ve done this incredibly duty to the country, being on the front line, preparing food for the nation. It’s important that we protect them as they protect the country.”

The task of coordinating tens of thousands of vaccines to its team members – who live in almost a dozen states and come from many diverse cultural backgrounds – is a complex and challenging one. To help, the company has partnered with Matrix Medical, a leading third-party medical provider, and is working with dozens of state and local health departments to acquire vaccine and run vaccinations sites at its locations.

So far, the response to the vaccinations has been encouraging, with over 15,000 team members receiving the vaccine in the first few weeks of the program. The company plans to hold many more vaccination events in the coming months, and it said it is committed to continuing to provide access to vaccines on an ongoing basis for as long as there is a need.

Even with a strong start, company officials acknowledge that there is still a long way to go, and they know that Tyson must continue to inform and encourage its team members about the benefits of the vaccine. Health decisions are personal, and the company has decided not to mandate vaccination. Instead, Tyson has been providing expert resources and education about the vaccine to team members in the hopes that the facts will be persuasive. The walls of the plants are covered with signs and flyers in multiple languages containing information about the vaccine, how it works and why it’s safe, and there is a hotline to ask questions. In coming weeks, the company also intends to run several marketing campaigns to reach its front-line team members to increase awareness and interest around its vaccination efforts.

In the end, even as the company works diligently encourage its team members to get vaccinated, the biggest motivation my continue to come from their own lives.

“I appreciate the company’s efforts to secure vaccines for us,” said Tim Adams, who works at the company’s Wilkesboro complex and has been employed with Tyson for 47 years. “I’m in a high-risk category due to my health, so for me it was an easy decision to get vaccinated. It’s the next logical step in keeping myself and those around me healthy and safe.”