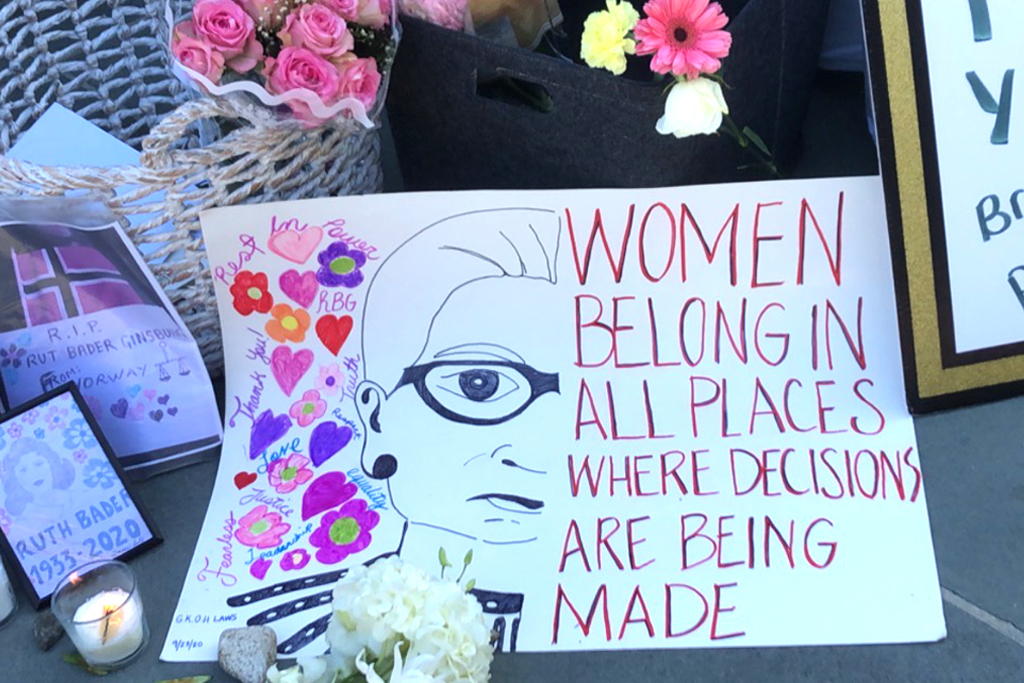 As the nation honors the legacy of late Supreme Court Justice Ruth Bader Ginsburg, women across the Tyson Foods enterprise share their own reflections on her profound legacy. Read from each of them what Justice Ginsburg’s pursuit of equality for women has meant to them personally, professionally and for the future of America.

I am heartbroken over the loss of Justice Ginsburg. Women around the world face professional and personal challenges every single day. Her dedication to be the very best at what she did is what guides us as lawyers. Her perseverance to continue in light of rejection is what drives us as women. Her personal vulnerabilities are what ground us as humans.

As a woman who has navigated through a career without a truly defined path, I have faced challenges of rejection and inequality that were unexplainable. Seeking to understand why I was rejected but without a response, I looked to the writings of Justice Ginsburg that would shine rays of hope in light of my own professional darkness. Her stories were so powerful that the anger I harbored converted to the energy I needed to continue to fight for my own career and hopefully make a contribution to a world where one day men and women will be equals, in every way.

Justice Ginsburg shoulders are broad, and her message is clear. We must stand on her shoulders and seek to make positive change in whatever way we can. We need a world where women and men can stand evenly side by side on the playing field of equality. And, where they do not, we as leaders must do what we can to pursue that change – one step at a time.

Ruth Bader Ginsberg is a role model for all Americans – regardless of gender, race, creed or other personal choices. Dedicated to the future of what equality could mean under the promise of the U.S. Constitution, Justice Ginsburg made possible consideration of ‘equal’ in all areas of our society.

She did this while never raising her voice, not letting the much-wanted end result get in the way of incremental progress and wholly dedicating her talents to the painstaking, detailed work of the moment. As RBG shared her views in her confirmation hearing, she was one of the first Supreme Court Justice nominees to be uncomfortably honest in her responses.

Although many on the committee did not agree with her personally or politically, there was no question about her qualifications or suitability, and she was confirmed in a landslide vote. Later in her career, she intentionally shifted her point of view to that of the stronger dissention voice because that was what the end vision of ‘equal’ demanded of her.

From her example, it is possible to effect change in difficult circumstances. It is possible to speak up with facts and a point of view that although unpopular, is required to be heard. And because of her life’s work, it is possible for future generations of Americans to have equal opportunity under the law to make their own choices and realize their own dreams.

United States Supreme Court Justice Ruth Bader Ginsburg was such a force in Washington, D.C. that when news broke of her passing, I witnessed crowds immediately start to gather at the Supreme Court steps. In the days since her passing, the crowds have only grown in size, bringing with them flowers, cards and signs to pay their respects.

A particular sign that caught my attention read, “Women belong in all places where decisions are being made.” The diversity of the crowd exemplifies the great unifier RBG, as she was affectionately known, continues to be.

She was the second woman to serve on the Supreme Court. She is the first woman to lay in state at the U.S. Capitol. Even in death, she is breaking barriers and reminding us all that women are equal to men.

Her continuous fight for equality is very inspiring. Throughout her legal career she fought hard to be treated equal to her male counterparts, and when she was appointed to the Supreme Court, she took every opportunity to fight for all women to be treated equal. Her dissents have made a difference and inspired federal legislation on equality.

I am passionate about bringing diversity into the room and into problem solving. I believe better outcomes come when we bring different ideas to the discussion. It can make a good answer into a great and aligned answer.

Being pretty apolitical, I didn’t know much about Justice Ginsburg until I saw the movie “On the Basis of Sex.” It outlines her early journey, graduating head of her law class and unable to find a job because of her gender. While likely dramatized, there is a pivotal moment in the film when she was arguing for a case that would allow for equal pay for women. Her rebuttal had a time limit, which was quickly running out. When it did, one of the male panel members said, “Go on, Professor Ginsburg,” which allowed her to continue with her case. Ginsburg won.

I love this moment as Ginsburg had the incredible tenacity to try to change a longstanding precedent. And, there was someone in the room that gave her voice a chance to be heard. I think Ginsburg made a lifetime of standing up for the hard issues and creating room for other voices to be heard.

A few women early in their career have approached me to share that they haven’t experienced gender equality issues themselves. I am happy that today, we don’t have to experience the same challenges that Ginsburg did, and the next generations might feel it less and less.

This is because of people like Justice Ginsburg who have gone before us to make this possible. This has inspired me to keep investing in women and to continue seek out what voices may be muted and should be heard.

As a U.S. military veteran, I have Justice Ginsburg to thank for being able to serve my country while starting a family.

Prior to serving as a Supreme Court Justice, Ruth Bader Ginsburg argued many cases before the high court. She was working up a case to the Supreme Court when the Department of Defense preemptively changed the policy requiring pregnant women to automatically discharge. She also successfully argued Fronterio v. Richardson, which required the military to treat men and women equally on the basis of pay and benefits.

Beyond that, she was a true testament of civility and showing diverse ideology doesn’t inhibit human connection and friendship. This was demonstrated by the devoted friendship she shared with late Justice Antonin Scalia. During times like these, her personal disposition makes her departure all the more saddening.

Justice Ginsburg exemplified the notion that women really can have it all.