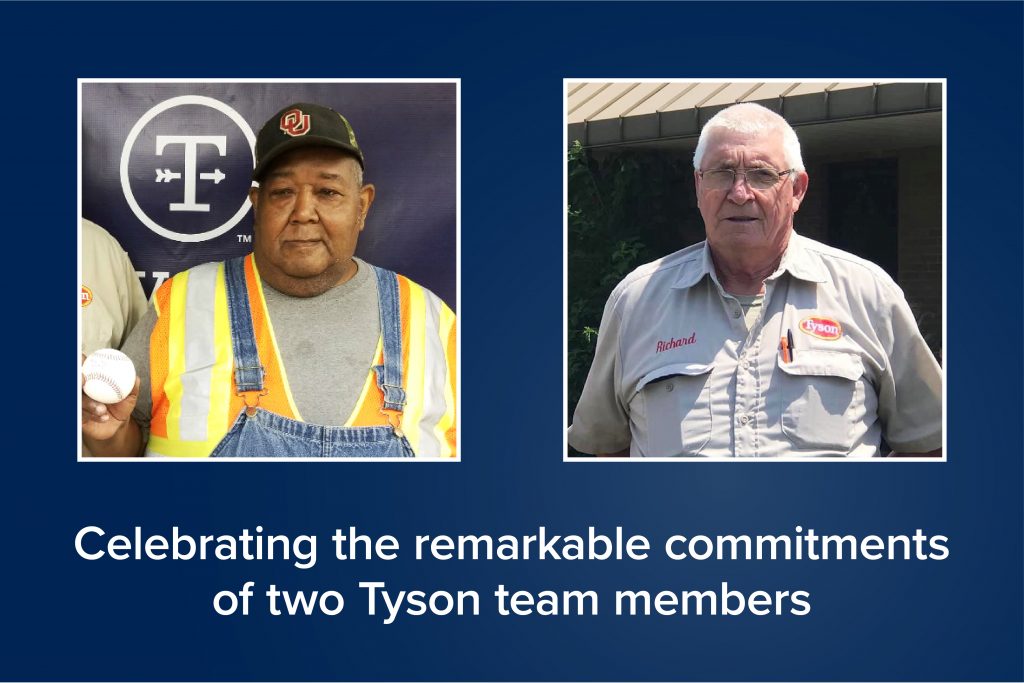 They just don’t come like Willie Jordan and Richard Judy anymore. These two men have devoted their entire careers to working for Tyson Foods. Their remarkable accomplishments are highlighted in the below profiles.

“I’ve hitched a ride to work with friends or coworkers for 50 years,” Willie said. “Supervisors would make sure I made it to work even if they weren’t going in.”

Willie and his mother started working at the Oklahoma plant on the cleanup crew before Tyson acquired the facility. They would travel to and from work together for several years before Willie went on to become supervisor of the crew. He eventually settled into a job working on the back dock, where he developed close friendships spanning 40 years.

Over the years, Willie has seen many changes at Tyson. But one thing he says has remained the same is the friendly spirit of team members who work at the Broken Bow facility. He credits them as the reason he’s worked for Tyson for so long.

Willie’s longevity means he now works with the kids and grandkids of people he started working with early on at the company.

To mark his 50-year anniversary with Tyson, Group President of Poultry Chad Martin and Vice President of Human Resources Operations Rick Nimrick visited Broken Bow to recognize Willie’s accomplishment. They presented him with a framed letter from corporate leadership expressing their gratitude for his outstanding service to the company.

There’s no one more deserving of retirement than Willie, something he plans to do in January. He says he looks forward to spending time with family, including two nieces and a sister who also work at our Broken Bow plant. And after the COVID-19 dust settles, he will head to California for the first time to visit his brother.

In March 1965, Richard Judy began his career as a contract chicken catcher for Tyson Foods. Now, he is celebrating 55 years with the company, making him one of our most tenured employees.

“I will always appreciate Tyson,” Richard said. “They have been really good to me, and I hope that I’ve done enough good for them.”

With over half a century of experience in poultry live operations, Richard says he’s enjoyed his line of work at Tyson.

“Getting to travel farm to farm and providing chicken to the plant so we can feed people is something I really like to do,” he said.

Much has changed since Richard began working for Tyson many years ago. After all, he started at a rate of 50 cents an hour. But he says one thing has remained the same- the values and culture.

“Richard’s knowledge and skill has been invaluable to the Monett, Missouri team and the company over the years,” said HR Manager in Monett April Fritts. “He’s been such a big part of Tyson in Monett’s past, present and future successes.”

And he doesn’t plan on slowing down any time soon.

“I’d have to thank God first, my parents and wife second, and Tyson third,” he said. “I’m incredibly blessed, and as long as God gives me good health, I’ll work as long as Tyson will let me.”