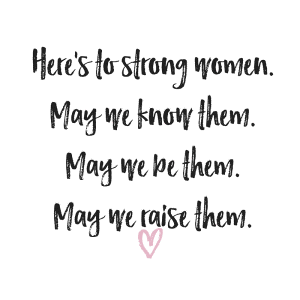 I always welcome the month of March—hello, Spring, and high five, fellow Arians! It’s also Women’s History Month—a time to celebrate the women who came before us, the women we surround ourselves with and the women who will come after us. The memes and #tags that fly around are #inspiring and #empowering. And this meme is one of my favorites—it speaks to my soul:

I believe it’s more than fair to say women haven’t received due credit throughout history. But that didn’t stop them from changing the world in critical and necessary ways that changed the course of history:

May we know them.

It’s not just women from across the centuries who inspire me to be strong and stay strong. I have my own long line of strong women to draw inspiration from.

My paternal grandmother, Marie Ulbrich, went to work following her first husband’s early death. Solely financially secure and putting a son through college and later law school, it took a lot of work for her future second husband to convince her to marry again (I’m pretty sure it was his shared love of dancing that changed her mind). My maternal grandmother, Phyllis Manson, put herself through graduate school. With a Master’s in social work, she went on to help pioneer the concept of community living homes for the intellectually disabled in the Detroit area. Not bad for a late-blooming career woman—in a time when the idea of a career woman was practically unheard of.

My mother was the first and only single mom I knew for many years in the 1970s. She made a name for herself as a paralegal in the Detroit legal community, whipped up a mean tuna casserole and taught every one of my sixth-grade BFFs how to DO THE HUSTLE. And my step-mother, who has been in my life since I was four, used her teaching skills to turn me into an early reader, a master popsicle-stick-crafter and a shoelace-tying ninja. She also taught me what it means to open your home and your heart to someone who is “not yours”—and that the simple act of doing so makes them yours.

May we be them.

Look around you. There is no shortage of women doing amazing things in the world and for the world every day. Just off the top of my head:

May we raise them.

When I was in high school I wanted to join the rowing team. Not as a rower but as a coxswain, the person who bosses all the rowers around; the “brain” of the boat. There was no such thing as a girls’ team back then and the boys’ team had a strict No Girls Allowed policy. So I had to put my dreams of ruling the world (and the boat) on hold—until college. I was raised to never give up on my own dreams and to pursue my passion until I make it a reality, which I did by joining the Michigan State University men’s crew team, claiming my rightful role as coxswain. Now, there are very few—if any—things left that girls cannot dream of and cannot do.

There are more women in the C-suite than ever before. And that number will keep growing. Some girls will grow into women who choose to be family caregivers as their primary role. Their choice requires strength and their work will be important. Some girls will grow into women who choose not to have children, instead focusing on career or adventure or whatever it is that stirs their passion. Some will blend their options and create some sort of balance between raising a family and building a career.

The beautiful thing about it is, if we keep doing this right, they will have the opportunities and choices, and the autonomy and support to choose.

Take time this Women’s History Month to remind the extraordinary, strong women in your life that they inspire you.

Communication, Capabilities and Leadership Manager for Commercial Sales at Tyson Foods
More from this author