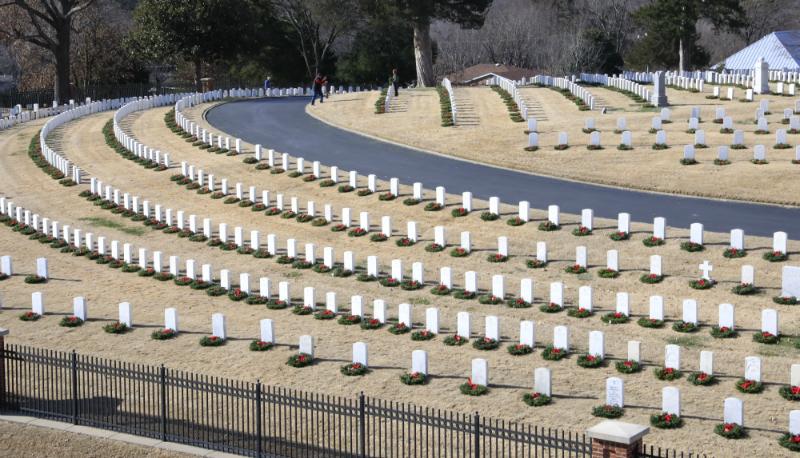 10 DecRemembering Our Veterans: Wreaths Across America

The cold, crisp air on an early December morning can energize the body and mind. On one particular December day each year, Wreaths Across America will also invigorate the soul.

The annual WREATHS ACROSS AMERICA (WAA) event is a coordinated wreath-laying ceremony conducted at most of the 1,400 national cemeteries in all 50 States and abroad. It includes the Fayetteville National Cemetery and others located near several of our plant locations. But it’s much more than an opportunity to decorate cemeteries. It’s a way to remember our departed service members during a time of year typically spent giving to others and sharing joy and good tidings.

I have participated in WAA for several years now at Fayetteville National Cemetery. Here’s what it’s like:

As a volunteer, the day starts early, and you’re on site just as the sun begins to rise. In the quiet of the morning and at the site of the headstones, the solemnness of the occasion begins to sink in. You realize each headstone represents a person. One who, at one time in life, agreed to defend our nation at the risk of his or her life. All genders, all races, all walks of life—resting eternally under rows of identical monuments.

Different organizations begin to arrive. Groups of Boy Scouts and Girl Scouts, high school and college ROTC Cadets, sports teams and various youth clubs and sponsors. Those with official roles in the ceremony begin rehearsing their performances. Other volunteers set up tables, sound systems and chairs.

The quiet morning is soon disrupted by the low rumble of motorcycles, driven by veterans and other well-wishers who’ve braved the cold. A glance to the cemetery entrance soon reveals the flashing lights of police escorts, a coordinated effort across many jurisdictions. Eventually the trucks arrive. Their cargo consists of inanimate objects—the balsam tips from Maine fir trees crafted into wreaths. But their arrival has the feeling of a motorcade carrying dignitaries.

Soon participants begin to arrive. People who have chosen to spend the early morning hours of this day honoring those veterans who have slipped their earthly bonds. Many return every year with family and friends to mark the beginning of their holiday season. Others are first-timers who heard about the event and have come out to see what it’s all about. All seem excited, humbled and thankful. As the crowd gets larger, the dull roar begins to build in expectation.

When the master of ceremonies announces the beginning of the event, quiet ascends. People move in close to take in the ceremony. Every eye is on the activities. Every ear listens to speakers relaying thanks and appreciation for the permanent inhabitants of that hallowed ground. Tears are shed as the crowd contemplates the courage and sacrifices of those being honored.

Finally, the crowd is divided into smaller groups to place the wreaths. Volunteers organize the activities at each site, guiding participants to take a wreath and look for an empty headstone. They face the headstone of the departed and place the wreath on the ground. As they again rise, each person is asked to pause. Veterans salute. Others place their hands on their hearts. Many say prayers. All say aloud the name of the person before them. It has been said a person dies twice – first when the body is exhausted and again when the person’s name is spoken on Earth for the last time. Volunteers delay that second death a little longer.

It’s not long before each grave has been decorated. Friends and family members have paid their respects and begin to file out. When the cemetery empties, the landscape is changed. At each gravesite now resides a physical marker, showing how we remember and honor our veterans.

We invite you to join us Saturday, Dec. 15, at Fayetteville National Cemetery, or another location close to you. You’ll be happy you did. You can find cemetery locations on the WREATHS ACROSS AMERICA WEBSITE, just search the ZIP code.

In Fayetteville, participants should park at Baum Stadium on the University of Arkansas campus and take shuttle buses to the cemetery. Parking is not available at the cemetery. The buses begin taking participants at 7 a.m. and the ceremony begins at 10 a.m.

Chairperson of the Veteran Business Resource Group at Tyson Foods

Sean Ryan is Health and Safety Senior Training Specialist (We Care Coach) for Tyson Foods. Sean has been actively involved in the VBRG for the entirety of his 5 years at Tyson. He was previously the Springdale Chapter Lead before becoming the overall Chair for the VBRG.

Before assuming his current role, Sean spend 2 years in Information Technologies as a Senior Analyst in Organizational Change Management. Prior to that, he was a member of the Retail Value Added Poultry (RVAP) Team as an Associate Product Manager; first managing Center-of-Plate items, then moving to the Grilled and Ready Team.

Prior to coming to Tyson Foods, Sean spent 22 years on active duty in the United States Army, retiring as a Lieutenant Colonel. During his time in the military, he took on assignments all across the United States, and overseas duty in Korea, Germany, and combat duty in the Middle East.

Sean has a bachelor’s degree in Sociology, and a master’s degree in Military Operational Art and Science. In his spare time he enjoys going to Razorback games, riding his Harley Davidson, and spending time with his wife Lid (also a Tyson Team member) and daughter Brianna.